World number one Rory McIlroy admitted he was struggling with a cold Friday after completing his rain-interrupted first round five strokes off the pace at the $6 million Barclays Singapore Open. 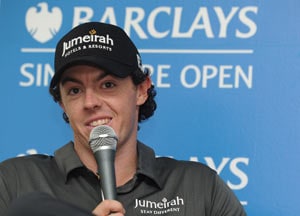 World number one Rory McIlroy admitted he was struggling with a cold Friday after completing his rain-interrupted first round five strokes off the pace at the $6 million Barclays Singapore Open.

The Northern Irishman, who can wrap up the European money title at par-71 Sentosa Golf Club, finished his last 10 holes at one-under-par 70 and with work to do after a thunderstorm cut short Thursday's play.

Thailand's Chapchai Nirat led on six-under-par 65 on the demanding course, one better than Denmark's Thomas Bjorn, with Simon Khan, Pablo Martin and Chinnarat Phadungsil a stroke further back.

An audacious eagle attempt at the last hole nearly slashed McIlroy's deficit but after chipping out of a greenside bunker, the ball popped out of the cup and ran 10 feet long, and he two-putted for par.

McIlroy said he was not feeling "100 percent" despite taking time off during last week's WGC-HSBC Champions to watch his girlfriend Caroline Wozniacki play tennis -- a move which drew strong criticism.

"I'm struggling a bit with a cold or a sinus infection at the moment, so I'm not feeling 100 percent," said McIlroy, who is also accompanied by Wozniacki in Singapore.

"The energy levels are fine, and maybe it's a good thing that the temperature and humidity is so high, because I might be able to sweat it out."

And McIlroy, who is facing a long day in the tropical heat, with 28 holes to play if the rain holds off, admitted he was already looking forward to having a rest.

"With the weather we have here at this time of the year, you have to expect some disruptions," he said.

"But hopefully we got the good side of the draw, and can get 18 holes in this afternoon and hopefully have a bit of a rest between the second and third rounds.

"I actually played pretty well from tee to green, just didn't really hole any putts, which was a bit frustrating. So that was the story of the round really."

McIlroy is bidding to become just the second man to win the PGA and European Tour money titles in the same season, after Luke Donald achieved the feat last year.

Chapchai also came close to an eagle on the last hole but pushed his putt just wide -- however, his birdie was still enough for the outright lead.

Play got under way immediately for round two, as clouds overhead threatened further interruptions in a tournament which is notorious for its storm delays.

Comments
Topics mentioned in this article
Golf Jeev Milkha Singh Rahil Gangjee Saina Nehwal Rory McIlroy
Get the latest updates on IPL 2021, IPL Points Table , IPL Schedule 2021 , live score . Like us on Facebook or follow us on Twitter for more sports updates. You can also download the NDTV Cricket app for Android or iOS.