World number seven Sergio Garcia, who is eyeing title defence at Thailand Championship, showed former tennis star Juan Carlos Ferrero how to carry the bag properly and even went to fetch them both water -- normally the caddie's job. 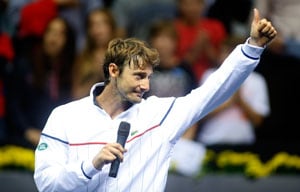 Sergio Garcia handed out tips to his new caddie, former tennis star Juan Carlos Ferrero, as he prepared for his title defence at the Thailand Golf Championship on Wednesday.

The world number seven showed Ferrero how to carry the bag properly and even went to fetch them both water -- normally the caddie's job -- at Amata Spring near Bangkok.

"Juan Carlos is one of my best friends," Garcia said, insisting: "He loves golf and has a three-handicap, so he knows what he is doing."

Boehm, an accomplished former US college player, is apparently unconcerned at being replaced as caddie and all three will go on holiday together after the tournament.

"But she wants to be back on the bag again some time," Garcia said, ahead of the tournament's start on Thursday.

"So you will see her again."

Comments
Topics mentioned in this article
Sergio Garcia Juan Carlos Ferrero Golf
Get the latest Cricket news, check out the India cricket schedule, Cricket live score . Like us on Facebook or follow us on Twitter for more sports updates. You can also download the NDTV Cricket app for Android or iOS.