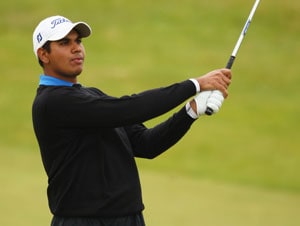 Bhullar had to fend off the challenges of American Jason Knutzon and 14-time Asian Tour winner Thaworn Wiratchant of Thailand to win the US$500,000 event with his three-day total of 12-under-par 204 at the Linkou International Golf and Country Club.

Knutzon enjoyed his best result of the season with his tied-second finish alongside Thaworn, whose hopes of securing a back-to-back victory effectively ended when he was left to mull a one-shot penalty incurred because of slow play.

Having to settle for second best behind Thaworn in Malaysia a fortnight ago, Bhullar was determined to make amends for his disappointments at the Yeangder TPC which was reduced to 54-stroke play tournament because of inclement weather.

"I told myself that I've got to win this tournament no matter what happens. I played really well on the par-fives all week," said Bhullar.

"This whole week I was totally focused and I was in the zone."

Bhullar held a single shot lead heading into the final round and quickly extended his advantage to two with an opening birdie on the first hole.

He dropped a shot on the third but recovered quickly with two more birdies on the fourth and eight holes to turn in 34.

After another birdie on the 10th hole, Bhullar dropped two shots on the 11th and 13th which saw his lead over Knutzon and Thaworn trimmed to one-shot.

Bhullar answered back with another two birdies in his closing three holes which included the 16th hole and par-five 18th to cement his place as the week's best golfer.

Comments
Topics mentioned in this article
Kunal Bhasin Gaganjeet Bhullar Thaworn Wiratchant Golf
Get the latest Cricket news, check out the India cricket schedule, Cricket live score . Like us on Facebook or follow us on Twitter for more sports updates. You can also download the NDTV Cricket app for Android or iOS.