Legendary US golfer Arnold Palmer died at 87. He was a seven-time major champion 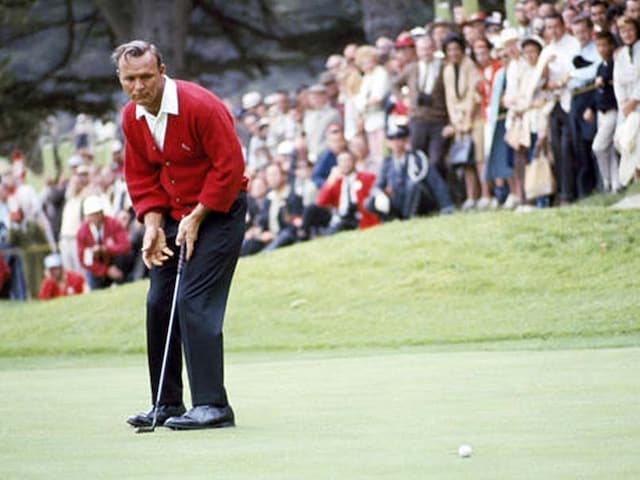 Iconic US golfer Arnold Palmer was recalled by the legends he battled and players he inspired as a beloved figure who spawned the modern big-money era with his charm and skill.

Rory McIlroy and Tiger Woods, stars of a newer generation who admired "The King," and Palmer's "Big Three" rivals of the 1960s, Jack Nicklaus and Gary Player, were among those who mourned Palmer's death Sunday at age 87.

But so was US President Barack Obama, who tweeted a photo of a lesson Palmer gave him in the Oval Office of the White House.

"Here's to The King who was as extraordinary on the links as he was generous to others. Thanks for the memories, Arnold," Obama tweeted.

Palmer's everlasting legacy is found in the star players and rich events of today, such as Rory McIlroy and the $11.5 million he won Sunday for taking the Tour Championship and FedExCup playoff crown.

"He has meant so much to golf worldwide," four-time major winner McIlroy told The Golf Channel, which Palmer co-founded. "Arnold wasn't the most successful player ever but he was the player that brought the game to the masses.

"If it wasn't for Arnold Palmer, we wouldn't be playing for these obscene amounts of money we play for every week."

Palmer became the first major US sports celebrity endorsement star, the role made for him in the 1960s. He remained a popular pitchman into his 80s, his "Arnie's Army," fan following unmatched until Woods spawned Tiger-mania in 1997.

"Thanks Arnold for your friendship, counsel and a lot of laughs," Woods said in a Twitter posting. "Your philanthropy and humility are part of your legend. It's hard to imagine golf without you or anyone more important to the game than the King."

The King now and forever

A shocked and saddened Nicklaus, who won a record 18 major titles, mourned one of his dearest friends.

"Arnold transcended the game of golf. He was more than a golfer or even great golfer. He was an icon," Nicklaus said. "He was a legend. Arnold was someone who was a pioneer in his sport. He took the game from one level to a higher level, virtually by himself.

"We were great competitors who loved competing against each other, but we were always great friends along the way. He was the king of our sport and always will be."

Palmer, whose biography 'A Life Well Played' is due in bookstores next month, had a design firm that built more than 300 golf courses worldwide.

His favorite drink, a combination of iced tea and lemonade, now bears his name Stateside.

"He endeared himself to the people," Player said. "He had charisma. He just fell out of bed with it."

Palmer played 50 Masters in a row before his last in 2004. He had served as a ceremonial starter with Nicklaus and Player in recent years but was too ill to do more than sit and watch the others tee off this year.

"A lot of us knew Arnie hadn't been doing well for a long time," McIlroy said. "He was such a great man. He put on a great face for probably quite a while. I know that he was suffering for a little bit.

"He meant a lot to a lot of people. The world and the game of golf won't be quite the same without him."

Augusta National, where Palmer won four green jackets between 1958 and 1964, was stunned as well.

"Arnold answered the calling for Masters greatness throughout his career," Augusta National chairman Billy Payne said. "The inspiration we drew from Arnold Palmer, however, is what we celebrate now and forever.

"Arnold's bold and daring approach to the game, combined with his citizenship, warmth, humor, humility and grace, were truly the signature of the man that we came to know and will fondly remember, as "The King."

Payne said the club will pay tribute to "our game's finest ambassador" at next year's Masters, adding, "Most importantly, we, his friends at Augusta National, will always love him."

Palmer inspires US at Cup

Palmer will also be celebrated at this week's 41st Ryder Cup matches at Hazeltine where holders Europe seek a fourth win in a row over a US squad now motivated to win for Palmer, who played on six Cup-winning sides.

"As we approach the Ryder Cup this week, our team will keep Mr. Palmer's family in our prayers and will draw from his strength and determination to inspire us," US captain Davis Love said.

Johnson added, "mr palmer was truly one of golf's greatest icons. His legacy will live on."

His death became known only hours after the end of the PGA season.

"It's not an exaggeration to say there would be no modern day PGA Tour without Arnold Palmer," US PGA commissioner Tim Finchem said.

(This story has not been edited by NDTV staff and is auto-generated from a syndicated feed.)
Comments
Topics mentioned in this article
Golf , 1900-01-01 ,
Get the latest Cricket news, check out the India cricket schedule, Cricket live score . Like us on Facebook or follow us on Twitter for more sports updates. You can also download the NDTV Cricket app for Android or iOS.