Second-round leader Thomas Bjorn of Denmark shot 71 and was in second place, while American Matt Kuchar had 68 and was in third place, three behind. 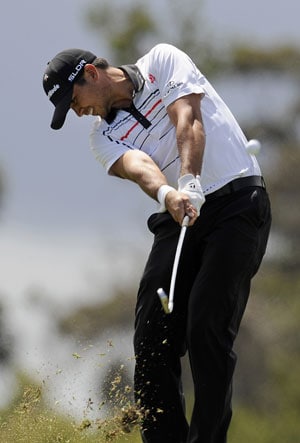 Australian Jason Day, who said he's enjoying the challenge of a tough Royal Melbourne, shot a 5-under 66 on Saturday to take a one-stroke lead into the final round of the World Cup. (Read: Lahiri tied 27th, Bhullar struggles after Round 3)

Day, who is playing in his first tournament since finding out eight of his relatives, including his grandmother, died in the Philippines typhoon on November 9, had a three-round total of 9-under 204.

"You just have to have some patience," Day said.

The wind picked up Saturday, taking away any advantage some early-morning rain did to slow down the slick greens.

"I like playing difficult golf courses, that's what I do better at," Day added.

Second-round leader Thomas Bjorn of Denmark shot 71 and was in second place, while American Matt Kuchar had 68 and was in third place, three behind.

"I felt like I was in control, as sharp as I would have liked to be," Kuchar said. "I did miss out on a couple of good opportunities, but I also made a handful and got up and down from some pretty ugly places."

Australia leads the World Cup team standings at 11-under, one ahead of the U.S team of Kuchar and Kevin Streelman.

Italy's Francesco Molinari moved up the leaderboard with a 66 and was fourth, while Streelman had a 74 and is in fifth place, five strokes out of the lead.

Molinari won the World Cup with his brother Edoardo in 2009.

"It was obviously a very good day," Molinari said of Saturday's round. "I seemed to play better on the front nine for some reason and then it was a bit of a battle really coming back in. I dropped a shot on 16 and holed a few nice putts for par."

Stuart Manley of Wales had an incredible up-and-down day, following a hole-in-one on the third with an 11 on the fourth. But he slowly recovered with an eagle and birdie on the back nine to finish with a 72, and was tied for eighth.

"The highest high to the lowest low," Manley said.

Adam Scott is also tied for eighth after a 68. After an opening 75 that included an 11 on one hole, the Australian has slowly moved up the leaderboard as he attempts to win his third tournament in a row.

"I've hit so many putts from 50 and 60 feet in the last two weeks it's hard to make them all the time," Scott said. "It's hard to even just two-putt them around here because you're fearful of knocking it seven or eight feet by all the time."

Comments
Topics mentioned in this article
Golf Matt Kuchar
Get the latest Cricket news, check out the India cricket schedule, Cricket live score . Like us on Facebook or follow us on Twitter for more sports updates. You can also download the NDTV Cricket app for Android or iOS.