Australia's Karrie Webb defends her title at the LPGA Founders Cup starting on Thursday as the series makes its US season debut just two weeks ahead of the season's first major championship. 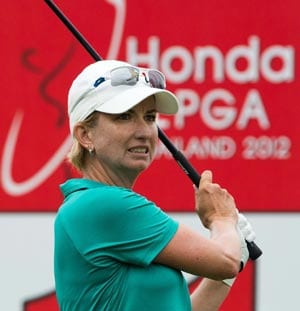 Australia's Karrie Webb defends her title at the LPGA Founders Cup starting on Thursday as the series makes its US season debut just two weeks ahead of the season's first major championship.

The event, which celebrates the 13 founding players of the women's tour, has stretched from 54 to 72 holes this year and prize money has been boosted to $1.5 million, one-third of that going to youth golf programs.

"It was such a great honor to win the inaugural Founders Cup," Webb said. "I'm looking forward to defending but also catching up with some of the many great women who have come before us.

"I don't think we can celebrate our history enough and it's always great to have our founders come out to any event. We can never thank them and the women before us for the platform they have given us."

"Driving it well and staying out of the desert is key to setting up good birdie opportunities," Webb said.

The tour moves on to US soil ahead of next week's $1.7 million Kia Classic at Carlsbad, California, and the season's first of five majors, the $2 million Kraft Nabisco Championship starting March 29 at Rancho Mirage, California.

American Angela Stanford comes into the event off a victory in last month's LPGA event at Singapore after winning a playoff that also included World No. 2 Na Yeon Choi of South Korea, China's Feng Shanshan and South Korean Jenny Shin.

Shin has had three top-10 finishes to open the season, just as Tseng has done, and her $167,043 in prize money so far this year has topped her entire 2011 season total in 15 appearances.

Feng, a three-time LPGA runner-up, has top-five showings in the two Asian events this season and earlier this month she won the Ladies European Tour's inaugural World Ladies Championship in China by a stroke over Thailand's Pornanong Phatlum.

Ranji Trophy To Use "Limited" DRS In Semi-Finals, Final