Arjun Atwal missed yet another cut, failing to make the weekend rounds by one shot at the Puerto Rico Open. 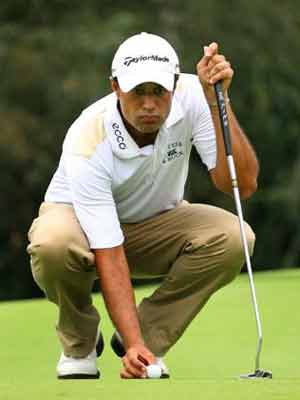 Arjun Atwal missed yet another cut, failing to make the weekend rounds by one shot at the Puerto Rico Open.

The first Indian to win on the PGA Tour is continuing to struggle as he shot an even par 72 to total 146 and the cut came at 145.

Atwal had four birdies and an equal number of bogeys. His birdies came on second, sixth, 15th and 18th and the bogeys came on seventh, eighth, 13th and 17th. This is the seventh missed cut in a row for Atwal.

Also missing out on weekend action was Daniel Chopra (74) and he totaled 147.

Matt Jones (67) opened a three-shot lead over George McNeil (70) at the midway stage after a windy second day. Jones was 11-under and McNeil at eight-under.

Japanese Ryo Ishikawa rallied on second day with a 67 and was tied third with Todd Hamilton (69) at seven-under 137.

Comments
Topics mentioned in this article
Golf Daniel Chopra Arjun Atwal Matt Jones
Get the latest updates on ICC Women's Cricket World Cup 2022 and IPL 2022, check out the Schedule , Live Score and IPL Points Table. Like us on Facebook or follow us on Twitter for more sports updates. You can also download the NDTV Cricket app for Android or iOS.