Fourteen-year-old Chinese prodigy Guan Tianlang is set to become the youngest-ever player at the US Masters after he held on for a one-stroke win at the Asia-Pacific Amateur Championship on Sunday. 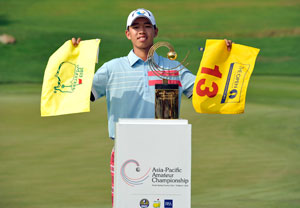 Fourteen-year-old Chinese prodigy Guan Tianlang is set to become the youngest-ever player at the US Masters after he held on for a one-stroke win at the Asia-Pacific Amateur Championship on Sunday.

Guan, the youngest player in the field and the overnight leader by two, shot a final round of one-under-par 71 at Thailand's Amata Spring Country Club to finish ahead of Pan Cheng-Tsung of Taiwan, who fired a 65.

He will be 14 years, five months and 17 days old when he tees off at prestigious Augusta in April, smashing the record set by Italy's Matteo Manassero in 2010 when he was aged 16.

Guan punched the air in delight and was quickly embraced by his father after clinching the win at 15-under 273 by nervelessly holing a five-foot par putt on the last hole.

"I'm so excited. I'm really happy to become the youngest player at the Masters and looking forward to going there. I don't know what's going to happen there, but I know I just want to do well," he said.

"Pan really did a good job, so I just needed to focus on my game and get some more birdies and keep going. I knew Pan had a really good front nine, so I was checking the scores a bit on the back nine.

"I just thought if I got a couple more birdies I would be the champion."

Schoolboy Guan, from the southern city of Guangzhou, started playing at the age of four and won the world junior title by 11 shots last year in San Diego.

In April, he made history as the youngest player to take part in a European Tour event when he played the Volvo China Open in Tianjin at the age of 13 years and 177 days.