Indian golfer Arjun Atwal flirted with danger when he stumbled to a bogey on the last hole but still managed to make the weekend cut in the AT&amp;T National here. 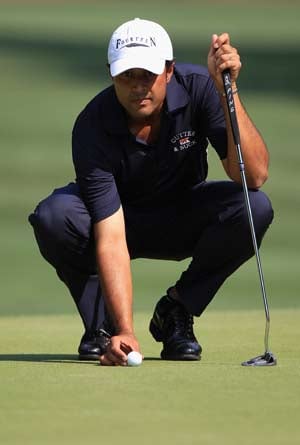 Indian golfer Arjun Atwal flirted with danger when he stumbled to a bogey on the last hole but still managed to make the weekend cut in the AT&T National here.

Atwal, with a 76 in the first round, seemed to have put himself out of weekend action as he bogeyed three in a row from second hole after starting with a birdie on the first.

A second birdie on the fifth hole gave him a lease of life as he turned in one-over.

As temperatures soared, Hunter Mahan still managed to stay in front with a six-under 65. Mahan made seven birdies in the stifling heat for a two-shot lead going into the weekend as he goes after a PGA Tour-leading third win of the year. Mahan was at seven-under 135.

Chris Couch sought medical attention and struggled to finish in the oppressive conditions. One caddie had to stop after nine holes and another vomitted to the side of the 13th green after drinking too much water.

Tiger Woods stayed in the game with a 68 in the morning and was five shots behind.

The cut at 148, a shot higher than the cut for the US Open last year.

Comments
Topics mentioned in this article
Louis Oosthuizen Bill Haas Rory McIlroy Arjun Atwal Golf Tiger Woods
Get the latest updates on IPL 2021, check out the IPL 2021 Schedule and Indian Premier League Live Score . Like us on Facebook or follow us on Twitter for more sports updates. You can also download the NDTV Cricket app for Android or iOS.