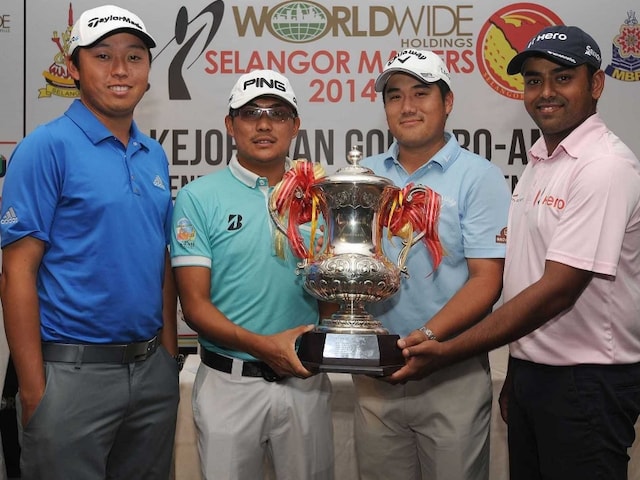 Lipsky said he was looking ahead to the tournament despite exhaustion.© NDTV

Current Asian Tour Order of Merit leader David Lipsky hopes to produce an adrenaline rush and challenge for the Selangor Masters starting on Thursday. The 26-year-old American is on his sixth straight week on the road but fancies his chances at the USD 410,000 Asian Tour event, thanks to his stunning victory at the co-sanctioned Omega European Masters in Switzerland two weeks ago.

"I'm feeling a bit tired but my game is good. I've been playing well so I'm looking forward to this week. I'm starting to hit the ball a lot better and it keeps improving. I think it's because I'm getting more competition so the more I'm out here, the better my game will be," said Lipsky, who has also enjoyed two-top-20s in Europe in recent weeks.

The Korean-American, who won the Asian Tour Qualifying School in 2012, will lock horns with many of the region's top stars this week including title holder Pariya Junhasavasdikul of Thailand, Korea's Baek Seuk-hyun, who finished third here last year and Indian star Anirban Lahiri, who is second on the Order of Merit.

The win in Switzerland propelled Lipsky to the top of the Order of Merit with USD 645,770, a position which he intends to consolidate by producing a strong showing at the Selangor Masters.

"It feels great when players and fans come out here and congratulate you," said Lipsky, who is a two-time Asian Tour winner. "It validates all the hard work that I've put in my game. I'm looking forward to try and win again.

"At the start of the year, I wanted to challenge for the Order of Merit crown but Anirban won in Indonesia and he was in the lead. I played well in Singapore but the win in Switzerland really put me ahead and now gives me a chance to win the Order of Merit."

Lahiri, who secured his fourth Asian Tour title at the Indonesian Masters in April, is determined to make amends after finishing second in last year's Selangor Masters. The world number 91 reckons that a sharp short game will be the key to success this week.

"I have a couple of levels to take my game up, especially around the greens. This is a tight week, a tough course. I've played here a few times and I know the course well and I kind of know what I need to do," said the 27-year-old Lahiri.

"It's good to see a full strength field here. It makes the event that much better. For me personally, I need to push myself over the line again. I've been getting into position quite consistently now and I am hoping to do that come Sunday," added the Indian, who finished tied fourth at the Yeangder Tournament Players Championship last week.

Local star Nicholas Fung, winner of the 2013 Asian Development Tour (ADT) Order of Merit, believes his local knowledge could give him the edge over the star-studded field gathered at the Worldwide Holdings Selangor Masters this week.

"I have played on this course since I was 14 during my amateur days. We used to train here every day and I know the course really well. You need a lot of local knowledge on this course and the fairways are tight. The greens are firm. What I need to do is to keep the ball in play all the time," said Fung, whose best round as an amateur was a 66.

Comments
Topics mentioned in this article
Golf Anirban Lahiri David Lipsky
Get the latest Cricket news, check out the India cricket schedule, Cricket live score . Like us on Facebook or follow us on Twitter for more sports updates. You can also download the NDTV Cricket app for Android or iOS.