The Taiwan Masters is the last event for players to fight for the 10 available spots on the Order of Merit for the USD seven million CIMB Classic in Malaysia and is also the penultimate event to qualify for the USD 8.5 million WGC-HSBC Champions in China next month. 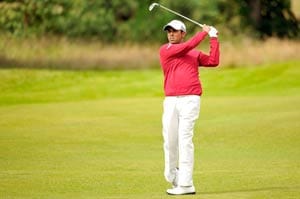 Indian golfer Anirban Lahiri will be one of the top contenders for the USD 600,000 Mercuries Taiwan Masters, that tees off at the Taiwan Golf and Country Club on Thursday.

The Mercuries Taiwan Masters is the last event for players to fight for the 10 available spots on the Order of Merit for the USD seven million CIMB Classic in Malaysia and is also the penultimate event to qualify for the USD 8.5 million WGC-HSBC Champions in China next month. The winner will take away a prize money of USD 120,000.

Thai star Thaworn Wiratchant will be looking to complete the Chinese Taipei double this year by adding Taiwan Masters to his Yeangder TPC crown. The last man to achieve this feat was Lu Wei-chih in 2011. Lu is playing in his third event since making a comeback from illness.

Among other top contenders Lu Wen-teh has the most wins of all time at this event where he has won on four occasions (1994, 1996,2007,2008). Tsai Chi-huang and Lu Wei-chih have both won the event twice. Hsieh Min-nan, the 73-year-old, who holds the accolade as the oldest man to make a cut on the Asian Tour will aim to improve on his own record this week. He made the cut in the 2010 edition of the event at the age of 70 years and 53 days.

Meanwhile, Lahiri will be looking to maintain a positive state of mind when he steps up to the tee at the richest Asian Tour event staged in Chinese Taipei.

"The course is such a beast. The conditions are always tough and it's a mental challenge. I'll be looking to meditate a lot," said Lahiri, a Vipassna meditation follower.

Since winning his third Asian Tour title at the SAIL-SBI Open on home soil earlier this year, Lahiri has not been able to reproduce his winning form as injuries have hampered his progress and caused him to miss successive cuts in his last two events in Taipei and Japan.

"It has been tough for me after my knee injury last month and I've not been able to play at my 100 per cent. It can be frustrating at times but I'm working through it and I'm getting better and stronger," said the 26-year-old, who finished tied-25th in last year's edition.

The Indian, who is eighth on the Asian Tour Order of Merit, remains hopeful of mounting a title charge this week to seal his place among the elite at two upcoming high profile events following his campaign in Taipei.

Comments
Topics mentioned in this article
Rahil Gangjee C Muniyappa Sujjan Singh Anirban Lahiri Shiv Kapur Thaworn Wiratchant Golf Mithun Perera Gaganjeet Bhullar Darren Clarke
Get the latest updates on ICC T20 Worldcup 2022 and CWG 2022 check out the Schedule, Live Score and Medals Tally. Like us on Facebook or follow us on Twitter for more sports updates. You can also download the NDTV Cricket app for Android or iOS.