Anirban Lahiri, who ended the opening day on three-under 69 to be tied 10th, made some good moves but a double bogey on the 18th gave him a 70 and he was six shots behind at the Albany Championship Club. 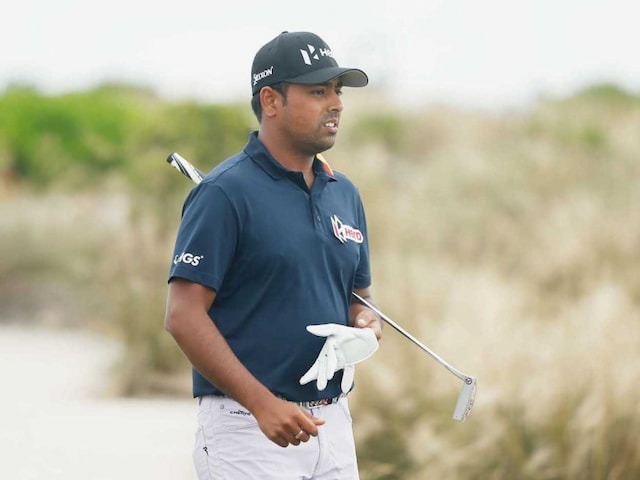 Anirban Lahiri in action on the second day of the World Challenge.© AFP
Nassau, Bahamas:

Indian golfer Anirban Lahiri failed to capitalise on a good opening round and slipped to end Day 2 of the World Challenge at tied 14th even as World No.1 Jordan Spieth grabbed a share of the three-way lead.

Lahiri, who ended the opening day on three-under 69 to be tied 10th, made some good moves but a double bogey on the 18th gave him a 70 and he was six shots behind at the Albany Championship Club.

Lahiri, who was paired with Chris Kirk on Friday, has an overall score of five-under so far and hopes for resurrection come Day 3.

Getting a sponsor's exemption in the PGA-sanctioned event, Lahiri started with a birdie on the first hole but somehow lost momentum as the round progressed.

Though the 28-year-old golfer from Bengaluru has JB Fowler for company before the penultimate round, but the upcoming star would be hoping for a better showing in the Elite 18-player strong field.

"If my mom had putted, she would have shot 65," Lahiri said.

But the star of the day was once again defending champion Spieth, who dominated the play with his top skills to be tied for top spot with Bill Haas -- another exemption player - and Jimmy Walker.

Spieth, whose hole-in-one in Round 1 remained the shot of the day, battled a rugged start with three straight birdies, and then a surge on the back nine carried him to a six-under 66.

Spieth shot up the leaderboard with an eagle on the par-5 11th hole from about 30 feet. He followed with two more birdies to get a share of the lead.

"So I've got a little bit to work on but everything feels good," said the 22-year-old player after the day's play.

The young sensation is also enjoying his stay in the serene islands, while taking care of his play on the course.

"Certainly when we're on the golf course I'm definitely up there. I'm just talking about off the course preparation has been half vacation, half preparation.

"But on the golf course, I mean I'm still getting as intense and upset and highs and lows that I experience at a normal PGA TOUR event. It's a little more fun because it's easier, you have two guys and we're playing faster and only 18 in the field, so it eases your mind a little bit, but the grind is still there," he said.

It was a calm and muggy afternoon in the islands and the winds were not strong enough, which reflected in the scoring.

It was also a very closely contested holiday event with quite a few in the list of 18 vying for the lead and at one point on the back nine, there was a seven-way tie for the lead.