Anirban Lahiri is somewhat disappointed at his two-under round that took him to seven-under and he was five off the lead. 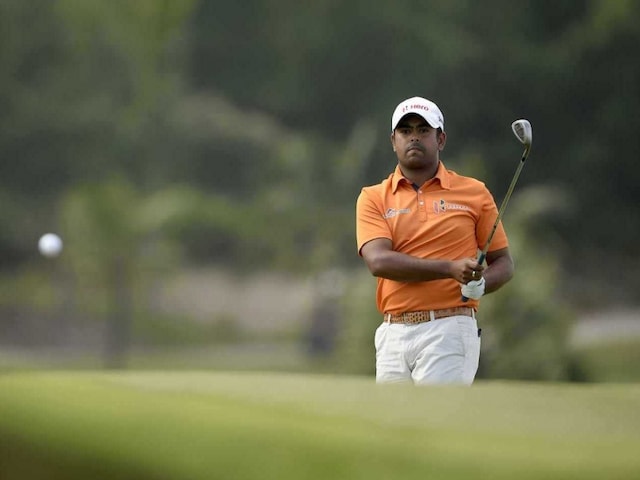 Anirban Lahiri is the highest ranked Indian golfer at 56 in the world.© AFP

Anirban Lahiri shot 68 and stayed in the top-10 of the Dean & Deluca Invitational on the PGA Tour this season in Fortworth.

But Lahiri was somewhat disappointed at his two-under round that took him to seven-under and he was five off the lead.

Lahiri, who began the week with a 65 and then followed it up with a 70 in a broken-up second round. On Saturday, he first came out and played six holes to complete his second round and then shot 68 in the 18 holes of the third to get to 203 on the Par-70 Colonial Country Club.

Jordan Spieth clocked a near flawless 65, which was smudged by just one bogey on the 18th, to come closer to his first PGA TOUR victory in his home state of Texas.

Meanwhile, Ryan Palmer shot 66 and was just one shot off the lead. Spieth was 12-under and Palmer was 11-under.

Lahiri stuck to his task and discipline of finding fairways and greens and was cruising at three-under through first 10 holes. He was inside top-five and then after a bogey on 12th, he exchanged two birdies with two bogeys, as he gained shots on 16 and 18, but dropped shots on 15 and 17th.

Lahiri said, "I think I played quite solidly and was going fine. Then I had a few poor swings with my short irons and that led to bogeys, all from the fairways. That was disappointing. So, in a way, you could say I am disappointed at not being closer to the lead (Spieth is leading at 12-under to Lahiri's seven-under). I need a good start and I will try my best. If I can get close early, then I can give myself a chance on the back nine."

Spieth's 65 came despite missing a lot of fairways and a few greens, while Palmer overcame consecutive early bogeys to shoot 66. He hit only three of 14 fairways and 11 of 18 greens in regulation.

Martin Piller, in the final group with Spieth and Simpson for the third round, shot a 68 and was tied for fourth at 10 under with Harris English (64) and Kyle Reifers (67). Matt Kuchar had a bogey-free 63 and moved up 35 places to a tie for ninth with Lahiri.