Anirban Lahiri enjoyed a stellar campaign this season where he won twice on the region's premier Tour, broke into the world's top-50, posted a top-five finish in a Major, qualified for his maiden Presidents Cup and earned his PGA Tour card. 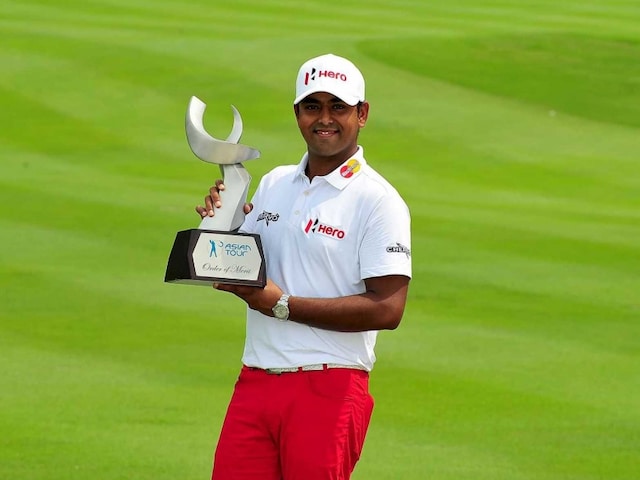 India's Anirban Lahiri has described lifting the coveted 2015 Asian Tour's Order of Merit crown as "really special" as he reset his goals to winning in America and becoming a Major champion in the near future. (Click here for latest Golf stories)

The 28-year-old enjoyed a stellar campaign this season where he won twice on the region's premier Tour, broke into the world's top-50, posted a top-five finish in a Major, qualified for his maiden Presidents Cup and earned his PGA Tour card.

As he savoured the rewards, Lahiri said he was honoured to join Asian golf legends such as Thongchai Jaidee and Thaworn Wiratchant of Thailand and countrymen Jeev Milkha Singh, Arjun Atwal and Jyoti Randhawa as Asia's number one golfer.

"It's something that I've always wanted to win," said Lahiri, who finished third and second on the Merit list in 2013 and 2014 respectively.

"I feel really happy and it makes me really proud to be in the same league of players like Thongchai, Jeev, Arjun, Thaworn and Jyoti as they are all legends of the game and have won the Order of Merit. It's nice to be in the same bracket and have something in common. It's something that is really special."

The tenacious Indian won the Maybank Malaysian Open and Hero Indian Open within the span of three weeks in February and went on to record five other top-10s around the world. Another key highlight was an equal fifth place finish at the PGA Championship where he became the best Indian finisher at a Major championship.

"Winning in Malaysia and then the Hero Indian Open will always be my cherished moments. To do it in a year which I've had is fantastic. Those wins got me into the Masters and playing The Open at St Andrews for the first time, it's been a year filled with highlights for sure," he said.

"Coming in joint fifth at the PGA Championship, it's been fantastic. There was so much that I took away from the week. The confidence and self-belief that I gained and earning the respect of the best players in the world ... that's not easily done," added Lahiri.

While he will focus primarily on the PGA Tour next year, Lahiri said the Asian Tour, which he has played full time on from 2008, had provided the launch pad to his career rise.

"The Asian Tour has been instrumental. It has a rewarding structure. If you can keep your card and break into the top-30, you can play in the best events around Asia," said Lahiri, who is a seven-time Asian Tour winner.

"There are so many fantastic events with great fields, world ranking points and prize money on offer. There are not many Tours in the world that give you that opportunity and that's what I've really benefitted from in the past eight years.

"Playing on various golf courses, the exposure of travelling and playing in different conditions and getting used to different time zones, these things definitely make you an international player. It prepares you for big things and it has made me a better player.

"Obviously now, I'm looking onwards and upwards. Hopefully, playing on PGA Tour, I'd love to get a win in America. Ultimately, I want to try and win a Major. I can't put a timeline on that goal, but if I can put myself in contention at least once next year, that would be a great start. The long term goal is to win a Major."