Anirban Lahiri bounced back with a four-under 67 in the second round at the Northern Trust Open. 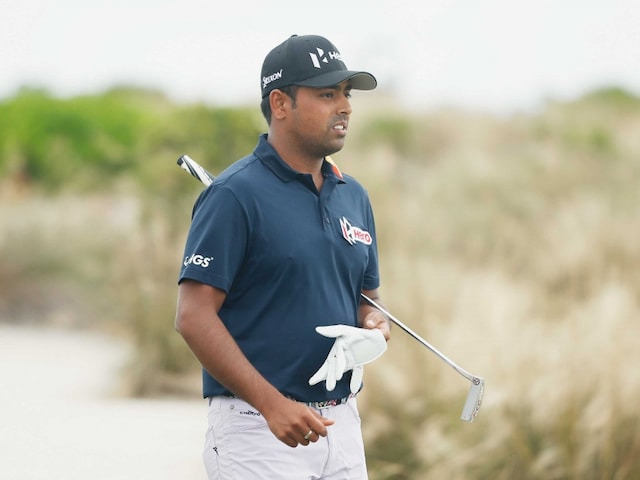 Anirban Lahiri jumped 47 places in the second round at the Northern Trust Open.© AFP
Pacific Palisades:

Anirban Lahiri fought back on the back nine with three birdies against no bogeys to ensure that he is around for the weekend at the Northern Trust Open on the PGA Tour at the Riviera.

Lahiri bounced back with a four-under 67 that put him at three-under 139 and in tied 28th place, up from 77th after first round.

The 28-year-old Indian, who had to come back early in the day to complete the remaining two holes from the first round, parred both and finished the round at one-over 72 in tied 77th place.

Canadian Jason Kokrak fired a 64 to open a one-stroke lead over Chez Reavie (67), even as Jordan Spieth, the world's No. 1 player, missed the cut by five shots.

Knowing he had some work to do, Lahiri opened with a stunning eagle on the par-first hole. He smashed his driver to well over 300 yards and then arrived onto the green with another great second shot. He holed the eagle putt from just over 12 feet for a great start. But he immediately went into the greenside bunker on the next then left himself a 16-footer for par, which he missed.

But he recovered with a 10-foot birdie on second only to give back a shot on the fifth with a par miss from just over three and a half feet. At that stage, Lahiri was one-under for the front nine and even par for the tournament, when it seemed par would be the likely cutline for the week.

A fine shot off the tee on par-3 10th landing to within three feet for a birdie and then holed a 15-footer for birdie on 11th to get to three-under. Steady play with some good chipping and putting kept him going. On the 18th, he rolled in a nice 17-footer for a final birdie to finish the round at 67.

"I hit it much better in the second round. Also my chipping and putting was sharp. That kept me in the tournament despite terrible ball striking in the first 27 holes," said Lahiri. "I am feeling better about my game with each week. Hopefully I can find some form over the weekend and put up some good scores."

The course was not easy and the greens were tricky and they took their toll on many other players in the field.

Kokrak, with eight birdies fired a 64 to open a one-stroke lead over Reavie (67). Kokrak, who birdied all par-fives, is now 10 under as he seeks what would be his first PGA TOUR win.

Dustin Johnson (66) and Bubba Watson (68) were in the group at eight-under 134. Johnson has been the runner-up at Riviera each of the last two years, while Watson won the Northern Trust Open two years ago with a 64-64 weekend. Rory McIlroy (69) and Adam Scott (68) were four shots behind.

Charl Schwartzel made a double bogey and a triple bogey -- the latter when a shot hit him in the hand -- and still shot 68 to remain in contention. He was in the large group at six-under 136 that included McIlroy, Scott, Hideki Matsuyama (67) and Justin Leonard (69).

Comments
Topics mentioned in this article
Anirban Lahiri Jordan Spieth Golf
Get the latest Cricket news, check out the India cricket schedule, Cricket live score . Like us on Facebook or follow us on Twitter for more sports updates. You can also download the NDTV Cricket app for Android or iOS.