Reigning Open Championship winner Ernie Els of South Africa believed his next biggest challenge will come from Asian players. Lahiri felt the course suits his style and that he was ready to win outside India in a field that includes the last two British Open champions Ernie Els, who won in 2012 and Darren Clarke, winner in 2011. 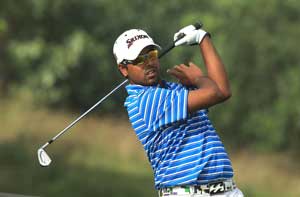 Anirban Lahiri, who has three Asian Tour victories to his name, says he is ready to win his first title outside India as he prepares to lead a dozen Indians at the USD 750,000 CIMB Niaga Indonesian Masters starting on Thursday.

Lahiri felt the course suits his style and that he was ready to win outside India in a field that includes the last two British Open champions Ernie Els, who won in 2012 and Darren Clarke, winner in 2011.

Lahiri said, "This golf course suits my style. I remember coming here the first year a few years ago and I didn't do very well. I was trying very hard and last year, I kind of eased into the golf course and let it happen. I think I got to do more of the same this year. It's a little more demanding off the tee because the rough are a little higher.

"The more I try to force it, the tougher it's going to get and I just got to go out there and play my game. I know I'm good enough to win and I've the game to win anywhere, whether it's India, Indonesia or Malaysia or even in Europe."

On the familiarity with a course, he added, "As far as putting it together in 72 holes, if you can do that and you can shoot the same numbers, it doesn't matter where you're playing.

"For me, the focus is to go out there, enjoy my golf and just stick to the basics and keep it in play. The moment we get onto the golf course, we're not thinking about factors like whether I've won here or there."

"I had a few offers to play all around the world but I feel that coming to Asia is a good call. I like going around the world as an Open champion and taking the game everywhere and playing with guys that are coming through.

"I feel that Asia is a market where these guys are eventually going to become top players," said Els, who finished tied 15th on the PGA Tour on Sunday.

Els registered tied 13th at the Masters Tournament in April, with the long putter, and hoped to carry the momentum into this week's full field Asian Tour event.

Els headlines the third edition of the CIMB Niaga Indonesian Masters alongside Darren Clarke of Northern Ireland, Lahiri and Scott Hend of Australia, who won the Chiangmai Golf Classic in March.

"I was so concentrated of getting ready for the Masters that I put all my energy in the long putter so I don't see any reason why I should change putters," added the 43-year-old, who helped the Habitat for Humanity, a charity organisation, raise funds to build more than two homes for the underprivileged in a charity dinner last night.

Hend, who took a three-week break from golf after his win in Chiangmai, hopes to return to winning ways in the country where he won his first Asian Tour title in 2008.

"I flew straight back to Florida after winning in Chiangmai and played soccer with my son on the front yard every day! There was no time to watch the television. I didn't touch the sticks for three weeks but pulled them out just in time for the Ballantine's Championship last week.

"I had to do some serious range work in the cold last week. It is nice to be in the warmth here because it takes five minutes to warm up instead of an hour!" said the big-hitting Australian.

Comments
Topics mentioned in this article
Jyoti Randhawa C Muniyappa Shiv Kapur Anirban Lahiri Sujjan Singh Rahil Gangjee Golf
Get the latest updates on ICC T20 Worldcup 2022 and CWG 2022 check out the Schedule, Live Score and Medals Tally. Like us on Facebook or follow us on Twitter for more sports updates. You can also download the NDTV Cricket app for Android or iOS.