Anirban Lahiri, the Asian Tour's Order of Merit champion-elect and the world number 41, has locked his place in the 12-man squad which will be captained by compatriot Jeev Milkha Singh at Glenmarie Golf and Country Club from January 15 to 17. 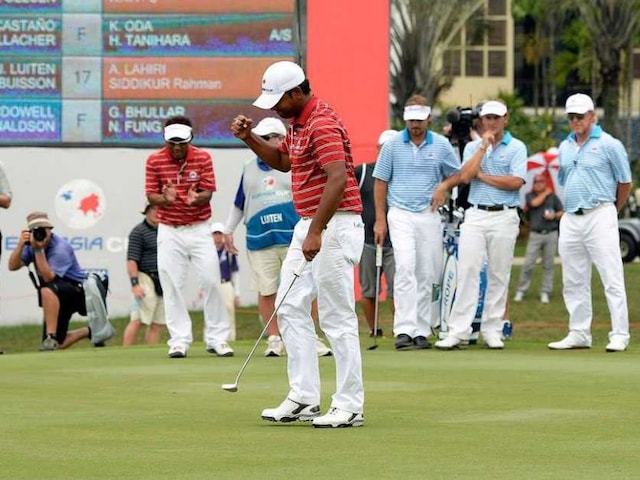 Indian star golfer Anirban Lahiri is ready to help Team Asia trump Europe in the second edition of the EurAsia Cup in January, saying it was this event which provided him the springboard to his rapid rise to fame last season.

Lahiri, the Asian Tour's Order of Merit champion-elect and the world number 41, has locked his place in the 12-man squad which will be captained by compatriot Jeev Milkha Singh at Glenmarie Golf and Country Club from January 15 to 17.

The 26-year-old Lahiri delivered two points for Asia in the inaugural edition last year which included a 2&1 singles victory over Frenchman Victor Dubuisson. Asia rallied to force a thrilling 10-10 draw with Europe, who led by 5-0 after winning the opening day's Fourball session.

"The first EurAsia Cup meant a lot to me and it was a very important event in my career. It really helped my confidence and it was my first taste of team golf at the highest level. I have great memories of it, it was such a fantastic week and I can't wait to go back. This time, we want to keep the EurAsia Cup in Asia," said Lahiri.

He has vivid memories of his second day's Foursomes match with partner Siddikur Rahman against Joost Luiten and Dubuisson. With Asia rallying after the first day's demolition, Lahiri holed a pressure-packed six foot par putt on the 18th green in the last match of the day to seal a one-hole win and put Asia 3-7 closer to Europe.

"My favourite memory was probably the match with Siddikur. It came down to the last hole and I had to make a six-footer to win our match and it was a really important putt as the team needed that point desperately," said Lahiri.

"It was a fantastic moment. Sunday was also special but in terms of what that point did for us on Saturday, it was very important. Without that point, Sunday would have been harder for us.

"I think after the first day, a lot of people had written us off. There was a lot of talk and hype in the media which wasn't very positive. It was a key moment for us on that final day to get the tie which was very important.

"The atmosphere in the team room on the Sunday evening was fantastic. It felt like a victory, having come back from where we started. It was a massive team effort. Every player contributed. Every player put his heart out on the line and that was what made the week the most special," he added. Lahiri believes his singles triumph over Dubuisson, who was then fresh from a runner-up finish at the WGC Match Play event, reinforced the self-belief that he could match the world's best golfers.

A few weeks after the EurAsia Cup, Lahiri won first title outside of India at the CIMB Niaga Indonesian Masters before adding another triumph at the Venetian Macao Open.

He maintained his great form by winning the Maybank Malaysian Open and Hero Indian Open in February to break into the world's top-50 for the first time and also represented the Internationals in the Presidents Cup. He also enjoyed a top-five at the PGA Championship.

Lahiri said the pressure of playing for a team was different than any other golfing week.

"The EurAsia Cup is a very, very important event. It's a fantastic addition to our Schedule, the fact that we can get the opportunity to play in an event like that is very important. I could feel the benefit of it going into the Presidents Cup this year as well. Team golf complements team golf and it's important to have that event."

Presented by DRB-HICOM, the EurAsia Cup will feature 24 matches, with day one showcasing six Fourball matches, followed by six Foursomes matches and 12 Singles matches on the third day.

The winning team will share prize money of USD 3.6 million while the runners-up will get USD 1.2 million.