World No.40 Anirban Lahiri will team up with Thailand's Thongchai Jaidee at the prestigious biennial President's Cup in Korea. The duo will face United States. 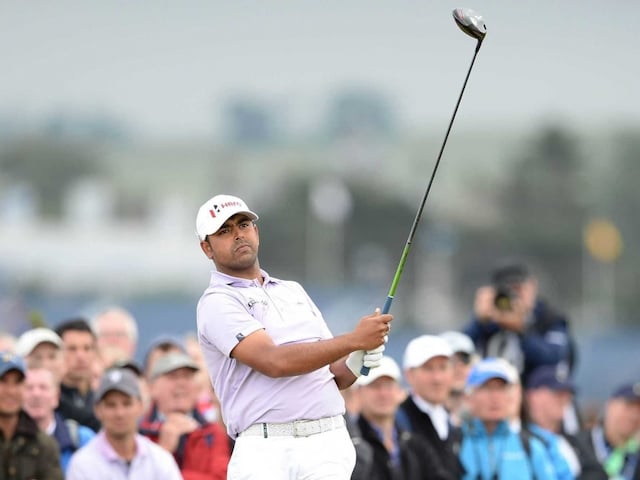 Anirban Lahiri came through as one of the automatic qualifications for the International Team (Image: Asian Tour)
New Delhi:

Ace golfer Anirban Lahiri added another feather to his cap by becoming the first Indian to qualify for the prestigious President's Cup. Lahiri, World No.40, came through as one of the automatic qualifications for the International Team, which will take on United States in the biennial President's Cup in Korea. (Click here for latest Golf stories)

In the International Team standings, the deadline for which ended on Monday, Lahiri finished seventh to make the team.

Also becoming the first from his country to make the team was Thailand's Thongchai Jaidee, who was ninth.

Expressing his elation at the qualification, Lahiri, winner of Malaysian Open and Hero Indian Open, said, "I can't describe the feeling because growing up, you look up to events like the Ryder Cup and feel terrible about it as you can't be a part of something like that.

But thankfully, we have the Presidents Cup for us to aim for and it is an achievement to make the team.

At one stage, Lahiri had fell out of the Top-10, but his fifth place finish at the PGA Championships hauled him back into the zone.

"I know Jeev (Milkha Singh) was really close to getting in one year when he was in the world's top-50 and unfortunately, he couldn't due to injury.

It would have done a lot of good for golf, not just in India but also in the whole of Asia."

He added, "I'm looking forward to being a part of the International Team. It'll be a massive boost for golf in the region. You get so many eyeballs and everybody in America will be watching.

To be a part of something historic like that is extremely special. All I want to do is make sure that I get a point for the International Team."

Lahiri has a good record at Matchplay, having been part of the Asian Team in EurAsia Cup and he also performed well at the WGC-Matchplay.

Lahiri contributed two points out of three including a singles win over higher ranked Victor Dubuisson.

Thongchai, currently ranked 44th in the world, has come close to making the International Team previously and was delighted to add another career highlight to his glowing resume.

The Thai legend was the playing captain for Team Asia in the thrilling come-from-behind 10-10 draw with Team Europe in the inaugural EurAsia Cup in Malaysia last yea, where he defeated Graeme McDowell in the singles.

"It's a proud moment for me. It'll be the first time that a Thai player will play in the Presidents Cup. I think it can help the other young Asian players. When they see that I can get into the team, then they too will aim for it" said the 45-year-old, who holds 13 Asian Tour victories and has also triumphed twice on European soil.

As of now the International team has four Australia, three South Africans and one each from Japan, India and Thailand.

The Presidents Cup will be held at the Jack Nicklaus Golf Club in Songdo IBD, Incheon City, from October 6 to 11.

"The Asian Tour is delighted and proud to see our members Anirban Lahiri and Thongchai Jaidee earning automatic places in the International Team.

"It is another feather in the cap for them as Anirban will be the first Indian and Thongchai the first Thai to play in the Presidents Cup.

"It is a fitting reward for their magnificent performances on the Asian Tour and across the globe over the past two seasons," he said.

"We expect them to contribute immensely towards the International Team's attempt to regain the Presidents Cup but ultimately, their presence will boost the development of the game across Asia.

Young golfers will now have another reason to aspire for the top and with Japan's Hideki Matsuyama also in the International Team, it proves that Asian golf has grown in stature and strength.

This is another fantastic testament towards the role played by the Asian Tour in developing professional golf in the region.

Comments
Topics mentioned in this article
Anirban Lahiri Thongchai Jaidee Golf
Get the latest Cricket news, check out the India cricket schedule, Cricket live score . Like us on Facebook or follow us on Twitter for more sports updates. You can also download the NDTV Cricket app for Android or iOS.