Angel Cabrera and Carl Pettersson were home and dry in the clubhouse on seven-under 65 on Thursday, heading the leaderboard as thunderstorms stopped play at the US PGA Tour Houston Open. 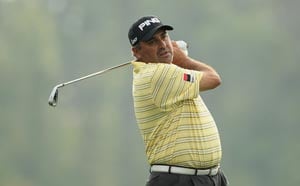 Angel Cabrera and Carl Pettersson were home and dry in the clubhouse on seven-under 65 on Thursday, heading the leaderboard as thunderstorms stopped play at the US PGA Tour Houston Open.

Only 51 players completed their rounds before the inclement weather brought play to a halt at Redstone, the first such delay for the event since 2009.

Defending champion Phil Mickelson, Fred Couples and South African Ernie Els, who needs a victory to qualify for next week's Masters -- had yet to make the turn when play was suspended.

The first round will resume on Friday , with officials hopeful of getting the event back on schedule by Saturday.

Tournament director Steve Timms said more than an inch of rain in a matter of hours had left spots in several fairways submerged.

"You just can't play under the rules of golf with that much casual water," Timms said.

However, Timms said he believed the course would be playable on Friday morning.

"Let it drain overnight, and I think it will be just fine," he said.

With the Masters, the first major of the season, starting at Augusta National in a week, Timms said the goal remains to have the Houston event finished by Sunday evening.

"We do everything we can operationally to hit that window," Timms said.

Ricky Barnes and Jeff Maggert both completed rounds of 66 to lie one off the pace. Brian Harman was at six-under on the course, with three holes to play.

Pettersson made the most of the morning's sunny, calm weather.

The Swede birdied four of his first six holes, and got to five-under with a birdie at the par-five eighth.

Pettersson, who said poor iron play contributed to missed cuts the past two weeks, changed his set-up on the range on Tuesday.

"I felt confident with that, but that doesn't always relate to good play," he said. "But I felt like I was striking the ball well again, and I told myself just to play aggressive and shoot at the pins and see what happens."

"The course is perfect," Cabrera said before the storm. "It's really spectacular and it's right for making a good score."