South Korean Amy Yang fired a six-under 66 on Thursday to take a one-shot lead over Australian Lindsey Wright after one round of the LPGA Kraft Nabisco Championship. 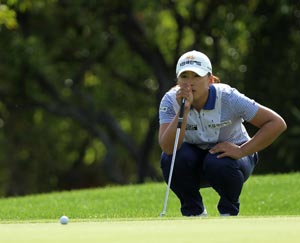 South Korean Amy Yang fired a six-under 66 on Thursday to take a one-shot lead over Australian Lindsey Wright after one round of the LPGA Kraft Nabisco Championship.

Breathing down their necks was world number one Yani Tseng of Taiwan, who was third after a first-round 68 in the first major championship of the women's golf season.

Tseng is a five-time major champion who has won two straight LPGA tournaments and three of her five LPGA events this season, while Yang and Wright are both seeking a first LPGA Tour title.

Yang, 22, nabbed five birdies in the span of seven holes from the fifth at Mission Hills, in the California desert east of Los Angeles.

She also chipped in for birdie from the fringe at 13. Overall she had eight birdies and two bogeys.

A former teenage sensation, three years removed from a win on the Ladies European Tour, Yang has five top-10 finishes in major championships but hasn't been able to claim an LPGA title.

"Everything was working well," Yang said. "I think especially my putting was better than other tournaments. I had a couple of shots that went into the trees, and it was hard to play, but I had some good par saves and good birdie putts."

Wright's 67 included six birdies and just one bogey. Three of those birdies came in a batch at the first, second and third holes, and she added two more at eight and nine.

Her performance is another step in a comeback from depression and anxiety that saw the 32-year-old step away from golf for the last four months of 2011.

She returned with a victory in the New Zealand Women's Open last month.

"It wasn't a great time, and I just couldn't really get through it," Wright said.

"It's hard to explain other than from a physical standpoint. People think, 'Depression, oh, just get over it.' It really impacts you physically, and playing on this tour, grinding it out each week when you're not sleeping and you can't concentrate or focus, it just gets you down, and it's a bit of a nightmare."

Tseng had acknowledged she was feeling tired during practice rounds after driving to Rancho Mirage from Carlsbad, near San Diego, after her victory in the Kia Classic on Sunday. She lacked spark on Thursday.

"I was really disappointed today," said Tseng, whose card included a bogey at eight where she hit a weak chip out of the greenside rough.

She regrouped to birdie four of the next six, but it wasn't the form she has shown in dominating the LPGA tour over the past year.

"I don't hit many good shots, and I don't leave myself lots of birdie chances out there," she said.

Defending champion Stacy Lewis struggled to a 74 that included four straight bogeys from the sixth.

After missing a par putt at eight she smacked the head of her putter in irritation.

Lewis was especially disappointed given the support she received from the gallery all day.

"People were cheering me around the whole day," she said. "I just couldn't quite get things going."

Comments
Topics mentioned in this article
Amy Yang Yani Tseng Golf Stacy Lewis
Get the latest updates on SA vs IND 2021-22, check out the Schedule and Live Score . Like us on Facebook or follow us on Twitter for more sports updates. You can also download the NDTV Cricket app for Android or iOS.