All eyes on Tiger Woods at PGA Championship

Fellow golfers appreciate how dangerous Woods can be with confidence and the hunger for a first major title since the 2008 US Open. 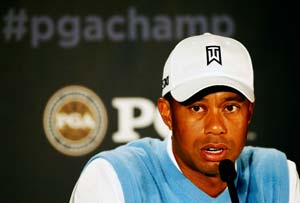 Woods, a 14-time major champion chasing the all-time record 18 major titles won by Jack Nicklaus, served notice he is on form with a seven-stroke triumph at last week's World Golf Championships event at Firestone, giving him five victories this year.

"I feel good. I'm very pleased with where my game is at," said Woods, who shared sixth at the British Open three weeks ago at Muirfield.

Second-ranked Phil Mickelson, whose fifth major triumph at the British Open came a week after a Scottish Open win, Masters champion Adam Scott of Australia, US Open champion Justin Rose of England and countryman Lee Westwood, a Muirfield contender until the final holes, also figure to be in the hunt for the top prize of $1.445 million at the $8 million event.

But they also appreciate how dangerous Woods can be with confidence and the hunger for a first major title since the 2008 US Open.

"Tiger is a factor no matter what," Scott said. "He has been up there in majors recently and just has not finished it off. But obviously he put it all together last week. He's going to be feeling good about where his game is at. I'm just worried about getting my own golf ball around the course."

"Having him back, having him play well, having him win like he has won this year is great for golf. He is playing solid and played great last week," Mickelson said.

"It's also great for the game to see guys like Adam Scott and Justin Rose come out and win major championships. That just makes it exciting because we have a number of players that can really create a lot of interest."

And they have a course that can create plenty of danger.

Oak Hill has hosted two prior PGA Championships, three US Opens and the 1995 Ryder Cup, and the par-70 layout has been expanded to 7,163 yards.

"The course is a fair, difficult test that you want without going over the edge and without trying to protect par. It's just the perfect fair test. It's one of the best setups that I've ever seen for that."

The rough is thick and tall but graduated off the fairways, a boon on some of the sloped fairways Oak Hill offers.

"It's imperative to hit the ball in the fairways and on the greens because it's going to be tough to get up and down," Woods said.

"This is one of those courses where you have just got to bring it ball-striking-wise. You've got to hit the ball well."

"There's a few opportunities where you are going to have wedges in your hands and you are going to try to make birdies, but the penalty for being a little too aggressive is harsh. It's very severe."

The back-nine offers birdie chances but also two closing holes where pars could be enough to claim the Wanamaker Trophy.

"There are holes that are some of the hardest pars in the game -- 17 and 18 are two of the hardest pars you can possibly have," Mickelson said. "We very likely could see a two- or three-shot swing coming down the stretch. You've got 12-16 where you can make up ground making birdies on 17 and 18 where you are trying to get home in pars."

Scott says experience will offer an edge, but only a small one.

"These traditional-style courses really test patience," Scott said. "An experienced and mature golfer should have a slight advantage in that. But in saying that, a young guy coming out on his game like Rory McIlroy blowing the field away isn't out of the realm, either.

"We've got five great finishing holes, a real mixed bag that will test every player differently," Scott said. "Then 17 and 18 are just an extreme test of ball striking and nerve. It's going to be an exciting finish no matter what."