Fred Couples, trying to become the oldest champion in major golf history at age 52, fired a five-under par 67 on Friday to share the lead after the second round of the 76th Masters. 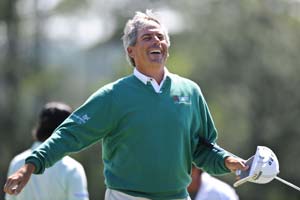 Fred Couples, trying to become the oldest champion in major golf history at age 52, fired a five-under par 67 on Friday to share the lead after the second round of the 76th Masters.

But World No. 2 Rory McIlroy and two stars without a major title, Sergio Garcia and Lee Westwood, were among those only one stroke off the pace as 18 players stood within three shots of the leaders at Augusta National Golf Club.

Couples, who won his only major title 20 years ago at the Masters, stood atop the leaderboard alongside fellow American Jason Dufner, last year's PGA Championship runner-up, at five-under par 139 for 36 holes.

"It was a very, very magical day," Couples said. "I'm going to be right there with everybody on the weekend."

"I can't pay much attention to them. I've got to worry about my own game," Couples said. "If I come out here and play my game the best I can, I'll have a shot."

The oldest champion in major golf history was Julius Boros, who was 48 when he won the 1968 PGA Championship. The oldest winner in Masters history was Jack Nicklaus, who won his 18th and final major crown at age 46 at the 1986 Masters.

Couples, who won two weeks ago on the 50-and-over Champions Tour, is the oldest player to lead the Masters after 36 holes, three years older than Lee Trevino when he set the old mark in 1989.

"It's a little bizarre," Couples said of his name atop the leaderboard.

Couples, playing in his 28th Masters, led after the first round in 2010 and settled for sixth.

Couples made bogeys at the first and third, birdied the par-3 fourth only to bogey the par-3 sixth, closed the front nine with three birdies in a row and closed the day with birdies at the par-5 15th, par-3 16th and par-4 18th.

"I feel like I'm very competitive," Couples said. "This is my favorite place in the world to play. I know every inch of the course. If you have that, you're going to save shots."

Frustrated Tiger Woods, the 14-time major winner whose victory two weeks ago snapped a 28-month win drought, made five bogeys, three of them on Augusta's four par-3s, and pars on all four par-5s in firing a 75 to share 40th on 147.

Showing no sign of his peak form, Woods was eight adrift in a share of 40th after matching his third-worst round in 68 Masters rounds.

"I just need to play a good solid round tomorrow, cut that deficit down and get off to a good start in the final round," Woods said.

Dufner, who stumbled in the final holes at the PGA and lost a playoff, birdied three of four holes starting at the par-5 13th before a closing bogey.

"I had some really nice rounds at PGA. Didn't quite work but carried over," Dufner said. "It gave me confidence that I can compete and play at a high level."

Dufner is trying to recover from throwing away a major only to win the next as McIlroy did after a Masters nightmare last year ahead of his US Open title. McIlroy fired a 69 on Friday, including a 40-footer for birdie at the fourth.

"I drove the ball a lot better which was the key for me," McIlroy said. "I was able to attack the pins a lot more. I just felt a lot more comfortable and could be more aggressive."

McIlroy, who was two when Couples won the Masters, likes where he stands.

"I'm right where I want to be," he said. "I put myself in position to have a chance to win this tournament again."

Westwood, in the top three in five of his past nine Majors, double bogeyed the 18th hole to squander the lead, taking a 73 after leading on day one with a 67. He missed putts of eight and four feet at 18.

"Double at the last was a disappointing way to finish," Westwood said. "I'm in a good position. I'm not far off the lead going into the weekend. I'm right where I want to be. I get a few breaks and I will be right in there."

Garcia, 32, birdied four of the first eight holes then had two birdies and two bogeys coming home, saying, "I left a couple shots out there."

Oosthuizen's wild 72 had a double-bogey at two, bogeys at four and five and birdies on three of the last five holes a day after he birdied four of the final five.

Three-time Masters winner Phil Mickelson, who shares 12th on 142 after a 68, warned the undulating greens could get tougher in dry weekend weather.

Comments
Topics mentioned in this article
Carl Pettersson Tommy Haas Angel Cabrera Fred Couples Bernhard Langer Tiger Woods Golf Rory McIlroy
Get the latest updates on IPL 2021, check out the IPL 2021 Schedule and Indian Premier League Live Score . Like us on Facebook or follow us on Twitter for more sports updates. You can also download the NDTV Cricket app for Android or iOS.