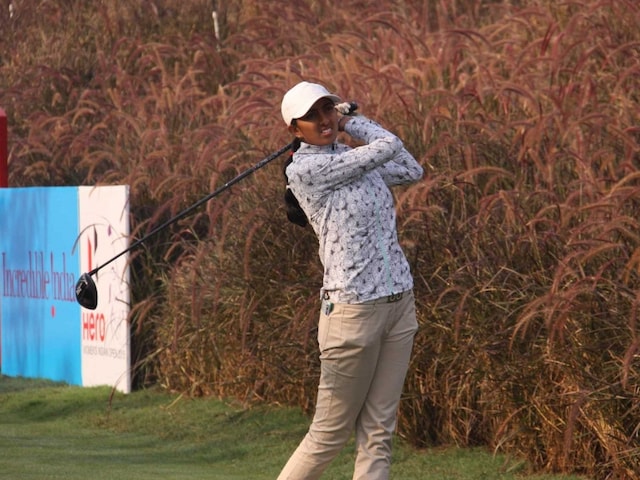 Aditi Ashok's highest-ever finish at the Ladies European Tour is tied eighth as an amateur at Hero Indian Open in 2012.© NDTV

Aditi Ashok moved to tied 31st on day three of the USD 600,000 Buick Championships on Ladies European Tour as she returned with a second successive one-over 73 on Saturday.

At four-over 220 from 54 holes, Aditi, whose personal best on the European Tour is tied eighth as an amateur at Hero Indian Open in 2012, was tied 31st.

Aditi got off on the wrong foot with a bogey on 11th hole, but back-to-back birdies on the two par-4s on 14th and 15th steadied her on a cloudy and blustery day at the Shanghai Qizhong Garden Golf Club.

A bogey on par-5 17th saw her turn in an even par, and a birdie on second put her in red figures again. Then came a troubled stretch where she dropped bogeys on third, fifth and seventh. However, a birdie on closing ninth gave her something to look forward to on Sunday.

Defending champion Shanshan Feng and overnight co-leader Na Yeon Choi stayed tied for the lead. Choi, the 2012 US women's champion, led for most of the day before making bogey on 18 to slip back into a share of the lead with Feng on nine-under-par.

Aditi was happy with her performance considering she played here without a practise round.

"I am happy with my performance so far given the fact that my golf bag arrived only on the night before the first round of the championship. So I started the tournament without a practice round. Having said that, I think I have played well. The conditions have been rather very windy for last two rounds - second and third - and today in third I did well and made 4 birdies. I will do my best and keep creating chances and minimise my mistakes to have a better finish."

Speaking of the round specifically, she said, "The bogey on third was a result of a three putt, and on the fifth I went into the fairway bunker and dropped a shot. On the par-3 7th, I missed the green."