Who Is Max Verstappen? Unknown Facts About The Man Who Rewrote F1 History Books

Max Verstappen, who made his debut for Red Bull after being promoted from junior team Toro Rosso a week earlier, beat Ferrari's Kimi Raikkonen, to win the Spanish Grand Prix 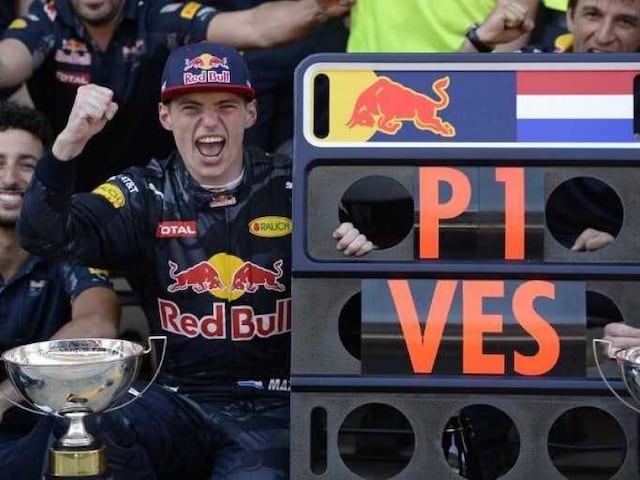 Max Verstappen, who became the youngest winner in F1 history, was also the youngest points scorer with seventh place in Malaysia 2015.© AFP

Dutch teenager Max Verstappen made Formula One history as the youngest race winner on Sunday in a sensational Spanish Grand Prix.

The following is a factbox on Verstappen, who made his debut for Red Bull after being promoted from junior team Toro Rosso a week earlier, beat Ferrari's Kimi Raikkonen -- at 36 twice his age -- by 0.616 seconds to win the Spanish Grand Prix on Sunday:

* Given his first go-kart at the age of four. Competes in first kart race at age of seven. A Belgian champion in the mini category at eight. He won all 21 races the following year to retain the title.

* Moves up to mini-max karting category in 2007. He wins every race on the calendar and also wins a Dutch title. In 2008, he won three karting titles and does it again in 2009.

* European and world karting champion in 2013.

* Moves into single seaters in 2014 and stands out in the FIA European F3 championship, qualifying fourth in his first race and winning his sixth. He also won the F3 Masters at Zandvoort.

* Signed by Red Bull for their junior programme in 2014 while still 16 years, with a seat at Toro Rosso for 2015. The governing FIA subsequently changes the rules to ensure nobody else can debut younger than 18.

* Makes Formula One debut with Toro Rosso in Australia 2015 as Formula One's youngest driver at the age of 17 years and 166 days.

* Becomes the sport's youngest points scorer with seventh place in Malaysia 2015 at the age of 17 years and 180 days.

* Ends the 2015 season with awards for Rookie of the Year, Personality of the Year and Action of the Year. Two fourth placed finishes.

* Starts 2016 season with Toro Rosso but after four races is promoted to Red Bull, while Russian Daniil Kvyat takes his place at the junior team.

Comments
Topics mentioned in this article
Red Bull Ferrari Toro Rosso Max Verstappen Kimi Raikkonen Sebastian Vettel Spanish Grand Prix Formula 1
Get the latest updates on IPL 2020, check out the IPL Schedule for 2020 and Indian Premier League (IPL) Cricket live score . Like us on Facebook or follow us on Twitter for more sports updates. You can also download the NDTV Cricket app for Android or iOS.