Lewis Hamilton will clinch his fifth world title on Sunday if he outscores nearest rival Sebastian Vettel of Ferrari by eight points. 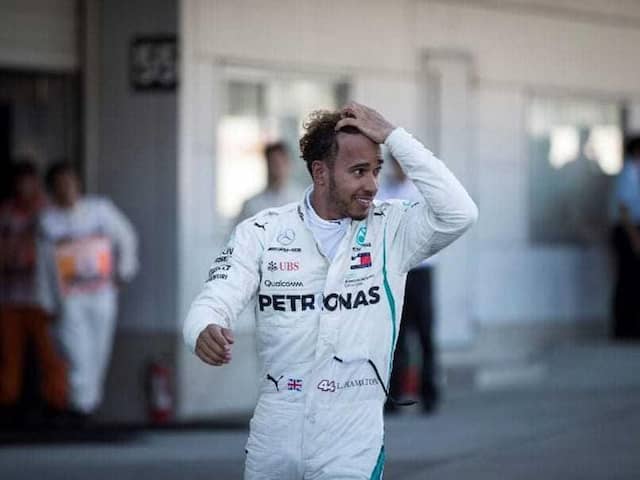 Lewis Hamilton clocked a best lap in one minute and 47.502 seconds.© AFP

Lewis Hamilton topped the times by more than a second ahead of his Mercedes team-mate Valtteri Bottas in Friday's rain-hit opening practice for this weekend's United States Grand Prix. The 33-year-old Briton, who will clinch his fifth world title on Sunday if he outscores nearest rival Sebastian Vettel of Ferrari by eight points, sat out the opening half of the 90 minutes before dominating the rest of the action. Hamilton clocked a best lap in one minute and 47.502 seconds as the asphalt at the Circuit of the Americas dried out, a time that lifted him clear of the field as he showed the class and raw pace that has made him a clear favourite to triumph in Sunday's race.

After heavy rain overnight and in the morning, the circuit was wet and challenging for the drivers as they adjusted to the conditions.

Bottas was second fastest, after pitting when he seemed set to improve his lap time, ahead of the two Red Bulls of Max Verstappen and Renault-bound Daniel Ricciardo, who was half a second adrift of his Dutch team-mate.

The Ferrari duo of four-time champion Vettel and Sauber-bound Kimi Raikkonen were back in fifth and sixth places after struggling with the slippery surface.

Vettel had two tricky moments when he managed to avoid going off the track at Turns One and Ten during the session and wound up nearly two seconds slower than the in-form Hamilton.

Carlos Sainz was seventh for Renault ahead of Romain Grosjean of Haas, Ferrari-bound Charles Leclerc of Sauber and his team-mate Marcus Ericsson.

The session was completed with only one major incident that came when Leclerc spun at Turn Nine and brought gravel on to the circuit.

The session was red-flagged for 10 minutes to allow the track to be cleared.

Ferrari United States Grand Prix Formula 1
Get the latest Cricket news, check out the India cricket schedule, Cricket live score . Like us on Facebook or follow us on Twitter for more sports updates. You can also download the NDTV Cricket app for Android or iOS.