Sebastian Vettel picked up a potentially fatal grid penalty for speeding under red flags during the morning session. 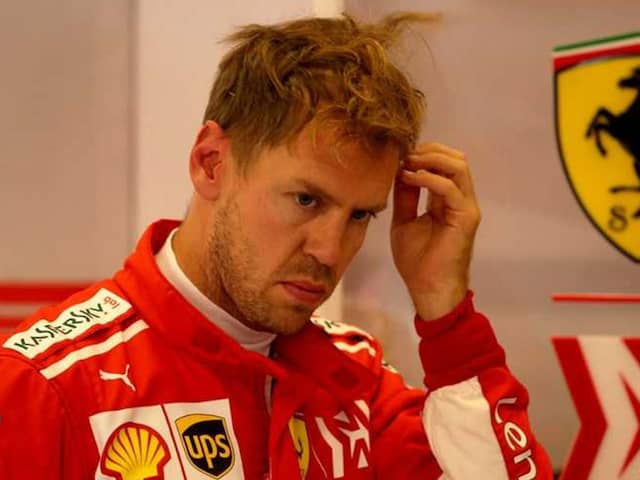 Sebastian Vettel was reported after Charles Leclerc brought gravel back onto the circuit after a spin.© AFP

Lewis Hamilton was given a helping hand in his pursuit of a fifth world title at the United States Grand Prix on Friday when flagging rival Sebastian Vettel was hit with a three-place grid penalty for Sunday's race. Hamilton topped the times for Mercedes in the rain-abbreviated second practice at the Circuit of the Americas which only burst into life for the final 40 minutes as the track dried. A relaxed Hamilton, looking to join Michael Schumacher and Juan-Manuel Fangio as a five-time world champion, clocked a best lap in one minute and 48.716 seconds that lifted him clear of the pack.

It confirmed a "double-top" for the Briton who had also been fastest in the morning's opening session and who needs to outscore Vettel of Ferrari by eight points to wrap up the 2018 championship.

The German struggled through a difficult day of slithering in the rain and then picked up a potentially fatal grid penalty for speeding under red flags during the morning session.

Vettel was reported after Charles Leclerc of Sauber brought gravel back onto the circuit after a spin. All drivers are expected to slow down and drive back to the pits when red flags are waved.

Vettel and Ferrari had hoped the stewards, who spent several hours investigating his speeding offence in the morning, might take a more relaxed and "common-sense" approach to his misdemeanor.

"I think I saw the red flag, I slowed down, had a look around (to see) where was the car potentially stuck in the wall," said Vettel.

"In my opinion it's not the right thing because if there's a car behind you, it might run into you, but more important that you don't get a penalty."

Esteban Ocon of Force India and Daniel Ricciardo of Red Bull were given three-place penalties for speeding under red flags at the Japanese and Australian Grands Prix respectively.

In the rainswept session, Hamilton was top ahead of Pierre Gasly of Toro Rosso, Max Verstappen of Red Bull, Fernando Alonso of McLaren and Nico Hulkenberg of Renault.

"It's not really been an eventful day -- which is a shame because a lot of people came out today," said Hamilton.

"The weather was miserable this morning; it looked like it was going to dry up going into FP2 but then all of a sudden the heavens opened again. In FP1 I only did a few laps because we need the tyres to last until FP3 and there's very little to learn in the rain."

Bottas, who was second fastest in the morning but did not set a time in the afternoon session, said: "It was a pretty boring day."

Sebastian Vettel United States Grand Prix
Get the latest Cricket news, check out the India cricket schedule, Cricket live score . Like us on Facebook or follow us on Twitter for more sports updates. You can also download the NDTV Cricket app for Android or iOS.