Charles Leclerc started on pole last weekend but lost the lead to Sebastian Vettel thanks to a decision to use a tactical 'under-cut'. 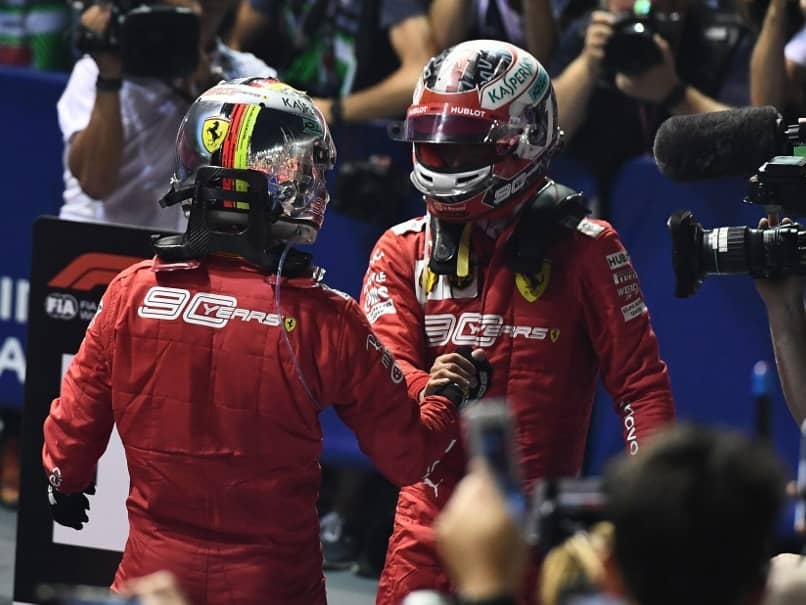 It was Sebastian Vettel's first victory since Belgium in August of 2018.© AFP

Four-time world champion Sebastian Vettel insisted Thursday that his Singapore Grand Prix victory will not sour his relationship with Ferrari teammate Charles Leclerc, who saw his chances of a hat-trick of wins dashed by pit-lane strategy in the city state. Leclerc started on pole last weekend but lost the lead to Vettel thanks to a decision to use a tactical 'under-cut'. It was Vettel's first victory since Belgium in August of 2018.

As Vettel looked ahead to this Sunday's Russian Grand Prix in Sochi, he said that he felt sympathy with Leclerc's radio outburst after the Monegasque driver was denied victory.

"I don't think that you should interpret too much from these messages because we are driving when we are opening the radio -- and I think if you would do the same exercise with any footballer or even a golfer, you'd be surprised," said Vettel.

"There's no point trying to understand a reason behind everything that people say when they are 'in the moment' -- it's pretty normal and obviously he wanted to win.

"He was upset when he realised he was behind, which, if it was the other way around, I probably would have been equally as upset."

Vettel revealed he spoke to Leclerc after the race and insisted their relationship will not sour.

"I spoke with him, I didn't speak much about the race," he said. "I don't think the undercut story will become nasty, answering all your questions.

"I don't think there is much to elaborate on. We did the race and it was clear what happened. Charles is challenging myself, I'm challenging him.

"There's only one space on the top step and if you fight for the victory, ultimately, you're not as pleased as the other guy if one takes first and one takes second. That's the nature of our sport."

But, recalling his own career, Hamilton advised Leclerc to remember the great chance he has in racing for Ferrari.

"I can just talk from personal experience and I understand what it's like, but also you have just got to remember your position," said Hamilton.

"If I was to speak to myself as a youngster, I was quite outspoken when I probably didn't need to be, but that's just how I was because I was fiercely competitive.

"You've got to be grateful for being given the opportunity even to win races in a top team, I don't think anyone has gone from their first year to Ferrari in their second year.

"That's an incredibly fortunate position to be in and it's just remembering your place. I wish that I knew that more when I was 22."

Sebastian Vettel Marina Bay Singapore Grand Prix Formula 1
Get the latest updates on IPL 2020, check out the IPL Schedule for 2020 and Indian Premier League (IPL) Cricket live score . Like us on Facebook or follow us on Twitter for more sports updates. You can also download the NDTV Cricket app for Android or iOS.