Charles Leclerc secured pole position for the Singapore Grand Prix on Saturday as he looks to claim a stunning hat-trick of wins. 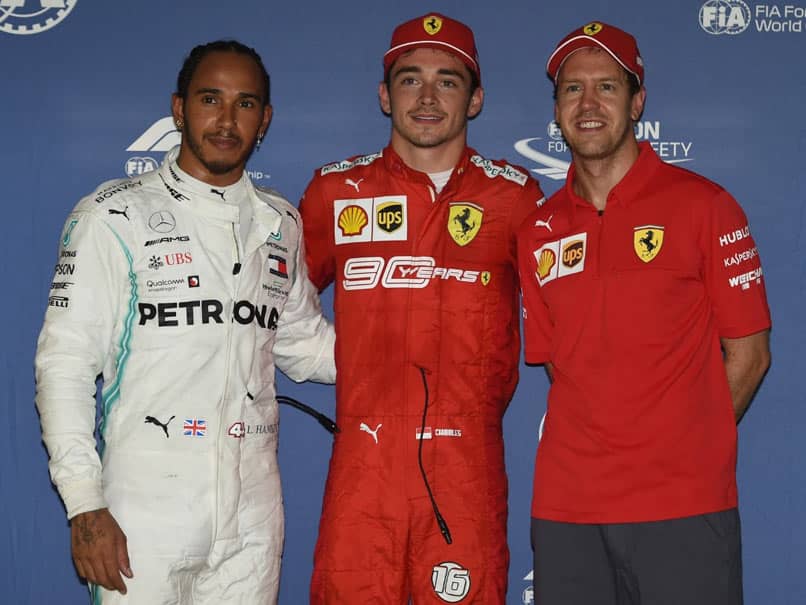 Ferrari's Charles Leclerc secured pole position for the Singapore Grand Prix on Saturday as he looks to claim a stunning hat-trick of wins after triumphs in Belgium and Italy. The 21-year-old will be joined on the front row by championship leader Lewis Hamilton in a Mercedes, with Leclerc's teammate Sebastian Vettel rounding out the top three, ahead of Red Bull's Max Verstappen and Valtteri Bottas. Despite winning the last two races on power-friendly tracks, Ferrari had been given little chance of competing under the floodlights at the demanding 23-turn layout in Singapore.

But Leclerc and Vettel tore up the script to gatecrash what was expected to be a Mercedes and Red Bull party.

"I'm extremely happy about today. It was a good lap but I lost it a few times," Leclerc said after completing a 1:36.217 second final lap.

"I have to thank the team. We brought some new bits that worked properly. I worked hard after a bad Friday and today it paid off," added Leclerc, who recorded his fifth pole position of the season.

Hamilton holds a 63-point lead over Bottas of Mercedes in the title race with seven rounds remaining.

The Briton said he would adopt an aggressive approach to Sunday's race in search of a ninth victory of the season, as he seeks a sixth world championship.

"I don't know where Ferrari picked up their pace but they did a great job," said Hamilton, who lapped in 1:36.408.

"I'm really happy to be on the front row with them. Tomorrow we can be aggressive."

Vettel has suffered an erratic season while his rookie teammate has shone for the Italian team. The German was quickest in the first half of the final part of qualifying until Leclerc and Hamilton edged past him.

"The final attempt should have been better but I was able to improve run by run. Maybe I peaked too early," Vettel said.

Dense smog from forest fires in neighbouring Indonesia had floated over Singapore in the past week, sparking concerns the F1 could be affected.

Air quality hovered around "unhealthy" levels in parts of the city Saturday evening but only a light haze was visible and did not affect the race.

The late season surge represents a vindication of sorts for Ferrari, who were impressive in pre-season testing but failed to take that form to the track until after the series returned from its summer break at Spa.

"It's even better than we hoped," Ferrari boss Mattia Binotto told reporters.

"The race is tomorrow and we shouldn't forget that but it's always nice to start at the front in Singapore. I still believe Mercedes are very strong."

His counterpart at Mercedes, Toto Wolff, was surprised by Ferrari's pace.

"This is a circuit we thought the Red Bulls and Mercedes would battle for pole. The Ferraris are fast, they did a good job and we have to get our act together tomorrow," the Austrian said.

"The statistics are against us but the race has not started," he added.