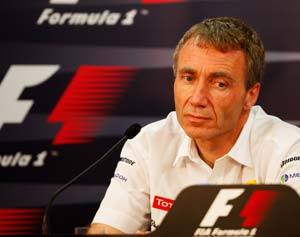 Bell has spent the last 10 years at Renault in the same position, helping Alonso to his successes in 2005 and '06, before leaving the team in October.

Bell, who has also worked at McLaren, Benetton and Jordan, will begin working with Mercedes from April 1.

Team principal Ross Brawn says "we are pleased to have recruited one of the most experienced engineers in the sport. He will be an important asset, bringing with him a wealth of Formula One knowledge and championship-winning experience."

Comments
Topics mentioned in this article
Nico Rosberg Fernando Alonso Ferrari Mercedes Formula 1 Michael Schumacher Bahrain Grand Prix Karun Chandhok McLaren
Get the latest updates on ICC T20 Worldcup 2022 and CWG 2022 check out the Schedule, Live Score and Medals Tally. Like us on Facebook or follow us on Twitter for more sports updates. You can also download the NDTV Cricket app for Android or iOS.