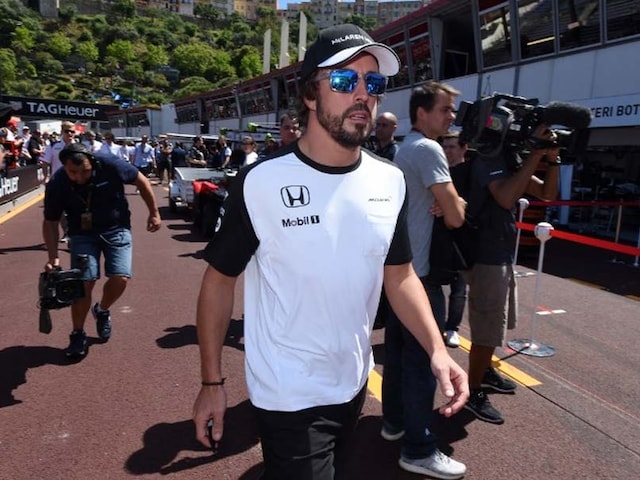 McLaren's former two-time world champion Fernando Alonso will miss next month's Formula One Monaco Grand Prix to race for them in the Indianapolis 500, the British-based team said on Wednesday. The two showpiece races take place on May 28 and McLaren -- whose fortunes have plummeted in F1 -- "will enter a single car in the 101st Indianapolis 500," said a team statement. McLaren did not say who will take the Spaniard's place for the Monaco race, one of the highlights of the grand prix calendar. However, his absence sparked speculation that his position could be filled in Monte Carlo by Britain's Jenson Button, another ex-Formula One world champion, who remains under contract in an ambassadorial role with McLaren.

Alonso will race in a Honda-powered Andretti car branded as a McLaren for the Indy 500, one of US motorsport's most prestigious races.

The 2005 and 2006 F1 champion said he wanted to compete in the Indy 500 to have a chance of fulfilling a career ambition of completing motorsport's "Triple Crown" in winning the Monaco Grand Prix, the Indy 500 and the Le Mans 24 Hours.

The only driver to achieve the feat was the late Graham Hill, with the British driver, like Alonso, a double F1 One world champion.

"I realise I'll be on a steep learning curve, but I'll be flying to Indianapolis from Barcelona immediately after the Spanish Grand Prix," said Alonso.

"I've won the Monaco Grand Prix twice, and it's one of my ambitions to win the Triple Crown. It's a tough challenge, but I'm up for it.

We're going back to the #Indy500. Hear from Fernando and @ZBrownCEO on their excitement to go @IndyCar racing. #McLarenIndy pic.twitter.com/tiqonmYqyV

Alonso is now in the final year of what has been a largely frustrating three-season deal with McLaren, with his failure to finish last week's Chinese Grand Prix in Shanghai the latest disappointing result.

He joined in the hope of winning a third world title, after two triumphs with Renault, but his best results have been three fifth places, with much of the blame attributed to the poor performance of the Honda engine.

However, Alonso insisted Monaco would be the only F1 race he would miss intentionally this season.

"Monaco will be the only 2017 Grand Prix I'll be missing, and I'll be back in the cockpit of the McLaren-Honda for the Canadian Grand Prix in Montreal in early June," he said.

The Andretti team won the race last year, with rookie driver Alexander Rossi the shock champion in the 100th running of the Indianapolis 500.

Fernando: "I'm sad to be missing the #MonacoGP, my favourite race of the year, but I'm sure whoever steps in the car will do a great job." pic.twitter.com/GumeDFKWH5

"Fernando's lack of experience on super-speedways is not of concern to me," said Andretti.

"I do believe that the Indianapolis 500 is one of the best places for a rookie to start because there is the opportunity for so much practice time on the track -- and, as we have demonstrated, it can be won by a rookie," added the son of three-time IndyCar champion and 1978 F1 champion Mario Andretti.

Meanwhile McLaren boss Zak Brown, who will also be in Indianapolis instead of Monaco, said: "Could Fernando win this year's Indy 500? Well, I wouldn't be so silly as to make any such rash prediction, but I expect him to be in the mix."

"Put it this way, the team he'll be racing for won the race last year, using the same Honda engine, and he's the best racing driver in the world. That's quite a compelling combination."

McLaren won the Indianapolis 500 with their own car in 1974 and 1976, but IndyCar is now a 'spec' formula where all teams use the same basic car, although different engine manufacturers are allowed to design their own aerodynamic bodykits.

Comments
Topics mentioned in this article
McLaren Fernando Alonso Monaco Grand Prix Formula 1
Get the latest Cricket news, check out the India cricket schedule, Cricket live score . Like us on Facebook or follow us on Twitter for more sports updates. You can also download the NDTV Cricket app for Android or iOS.