Ferrari's Vettel and Kimi Raikkonen, and Red Bull's Max Verstappen all went out just after the start of the first wet race in Singapore, which saw three safety cars and finished with only 12 drivers. 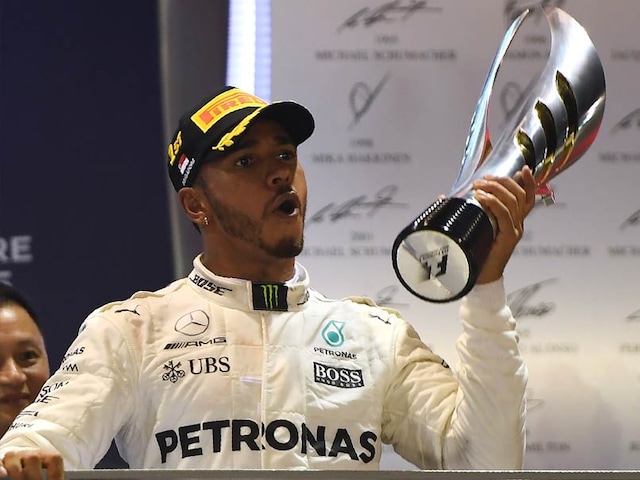 Lewis Hamilton won a chaotic and rain-hit Singapore Grand Prix on Sunday to seize control of the Formula One world championship as his title rival Sebastian Vettel crashed out on the first lap. Ferrari's Vettel and Kimi Raikkonen, and Red Bull's Max Verstappen all went out just after the start of the first wet race in Singapore, which saw three safety cars and finished with only 12 drivers. It all played perfectly into the hands of Mercedes driver Hamilton, who went from fifth on the grid to first and held off Red Bull's Daniel Ricciardo to clinch his third win in a row.

With his 60th race victory and seventh this season, Hamilton -- who had said he needed a "miracle" after struggling in qualifying -- stands 28 points ahead of Vettel with six grands prix left this year.

"Guys what can I say -- what a turn-around today! Fantastic job with the team strategy," Hamilton said over the radio, before leaping out of his car and hugging his engineers.

"God blessed me today, for sure," he said later, dripping with champagne. "I capitalised on the incident -- who would have known that would happen?

"It was really unfortunate for the Ferraris but a great result for the (Mercedes) team."

Some drivers had expressed concerns about visibility in the wet under floodlights, but the night race had hardly started when it lost three of the first four cars on the grid.

Raikkonen ploughed into Red Bull's Verstappen on the first corner, taking both cars out of the race and also heavily shunting Fernando Alonso's McLaren.

Pole-sitter Vettel, who had been looking to reclaim the world championship lead from Hamilton, spun further ahead and lost his front wing, a crash that also ended his race.

"Obviously it sucks being on the wrong side of the track now, but that's what it is," Vettel shrugged after returning to the paddock.

But Hamilton dodged the pile-up and he progressed from fifth on the grid to first, ahead of Ricciardo, as the race finally restarted after a safety car.

Alonso lasted just a few laps before the damage sustained at the first corner forced him to retire, and Toro Rosso's Daniil Kvyat became the fifth man out when he ploughed nose-first into a barrier -- prompting a second safety car.

Mercedes declined to pit Hamilton under the safety car but after the restart, he reeled off a string of fastest laps on the slowly drying track, extending his lead over Ricciardo.

Ricciardo and then Hamilton pitted for ultra-soft tyres after laps 28 and 29 and the Briton emerged 8.7 seconds ahead with 50 minutes left on an increasingly quick track.

Hamilton had a healthy advantage of 9.6 seconds when Sauber's Marcus Ericsson spun and stopped on Anderson Bridge, bringing out a third safety car and wiping out the Briton's lead.

"Why another safety car?" Hamilton grumbled over the team radio.

But Hamilton shot off after the restart to maintain the gap from Ricciardo and as he finally took the chequered flag, the grandstand came to its feet and fireworks lit up the night sky.

Nico Hulkenberg and Kevin Magnussen both retired late in the race to bring the total number of casualties to eight.

Comments
Topics mentioned in this article
Mercedes Lewis Hamilton Formula 1
Get the latest Cricket news, check out the India cricket schedule, Cricket live score . Like us on Facebook or follow us on Twitter for more sports updates. You can also download the NDTV Cricket app for Android or iOS.