Verstappen had looked set to become the first teenager on pole position but Vettel stormed through with two blistering laps in the final session to snatch it by three-tenths. 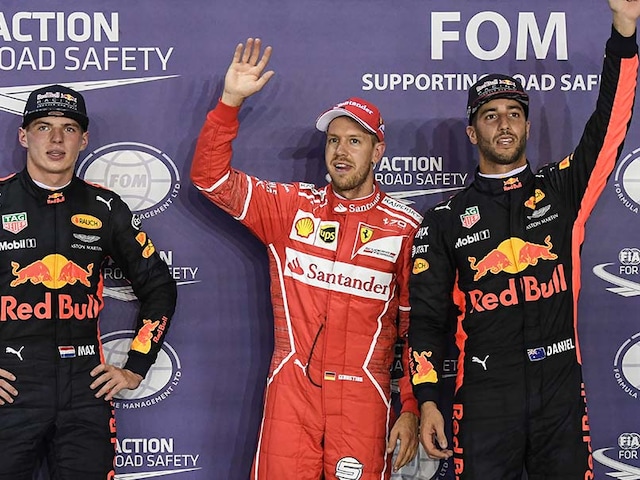 Ferrari's Sebastian Vettel came from nowhere to seize pole position at the Singapore Grand Prix as he threw down the gauntlet to championship leader Lewis Hamilton on Saturday. Vettel, who had been anonymous in practice, timed a record 1min 39.491sec at the floodlit Marina Bay street circuit ahead of Red Bull's Max Verstappen and Daniel Ricciardo. Ferrari's Kimi Raikkonen will start fourth with Hamilton, who leads Vettel by just three points in the standings, fifth ahead of his Mercedes team-mate Valtteri Bottas.

Verstappen had looked set to become the first teenager on pole position but Vettel stormed through with two blistering laps in the final session to snatch it by three-tenths.

"Yesterday was difficult, this afternoon was difficult but tonight the car just came alive," said Vettel, who looked surprised by his own performance.

Qualifying has often been crucial in Singapore, where seven of the nine races so far have been won by the driver who started from pole position.

The drivers had got off to a slow start after a fire in a Porsche Carrera Cup race before qualifying left oil on the track at Turn 20, making driving conditions treacherous.

"The oil seems everywhere in the final sector," complained Toro Rosso's Daniil Kvyat, as the early times were far slower than those seen in practice.

Williams driver Felipe Massa slid heavily into the barriers, puncturing a rear tyre, and he was one of the five to drop out in Q1 as Red Bull's Verstappen and Ricciardo led the timings.

The Ferraris set a quick pace at the start of Q2 as first Raikkonen and then Vettel went top, before Verstappen returned to the head of the table with a time of 1:40.379.

Verstappen and Ricciardo led the Ferrari pair and Hamilton into the top 10 shoot-out and the Dutch teenager soon gunned to 1:39.814 -- before being eclipsed by Vettel's 1:39.669.

Verstappen made a hash of his final lap and Vettel lowered his time to 1:39.491, afterwards whooping and shouting to his team-mates in Italian as he celebrated pole.

Comments
Topics mentioned in this article
Ferrari Red Bull Sebastian Vettel Max Verstappen Daniel Ricciardo Formula 1
Get the latest Cricket news, check out the India cricket schedule, Cricket live score . Like us on Facebook or follow us on Twitter for more sports updates. You can also download the NDTV Cricket app for Android or iOS.