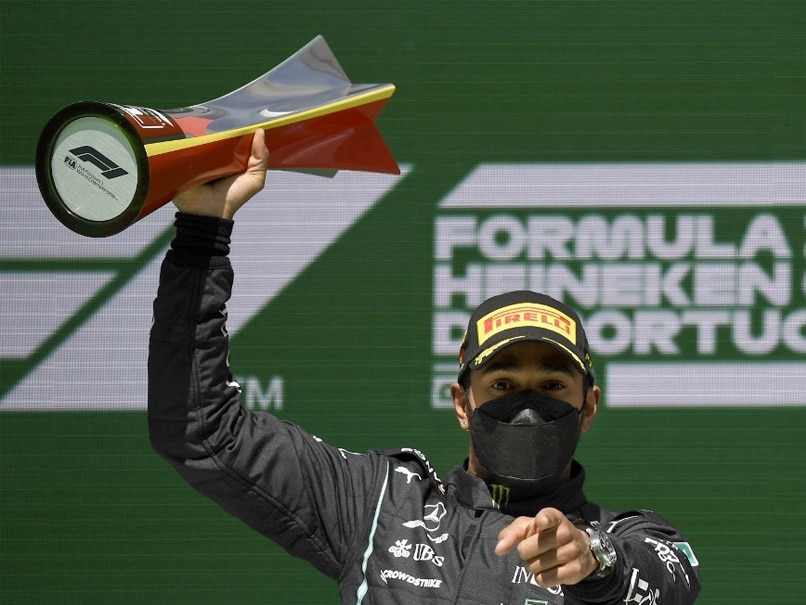 In third place in Portimao was pole-sitter Valtteri Bottas in the other Mercedes with Sergio Perez in the second Red Bull in fourth.

"That was such a tough race physically and mentally. I didn't get a good start and also lost out at the restart but it was a great result in the end," said Hamilton.

"Today wasn't all perfect and we need to get ready now for the quick turnaround for Spain."

At a sun-drenched Algarve International Circuit Bottas led Hamilton from the two Red Bulls into the first corner.

By the end of lap one it was the safety car which led after the two Alfa Romeos collided, with Kimi Raikkonen's front wing littered across the straight after clipping Antonio Giovinazzi's car.

Bottas carefully controlled the rolling restart on lap seven but in his rearview mirror he will have seen Verstappen charge past Hamilton and into second.

"That a boy" was the pleased reaction on the team radio from the Red Bull pits.

But four laps later and a mistake by the Dutchman on turn 14 let Hamilton regain second, darting past on the inside with Verstappen snapping: "I'm just a sitting duck on the straight. It's unbelievable."

Hamilton hit the front with a superb sweeping move past Bottas at the start of lap 20, quickly establishing daylight between the Mercedes men.

Verstappen was the first of the leading group to pit on lap 36, with Bottas next, followed by Hamilton, with Perez yet to change tyres, in front.

With 13 laps left Hamilton pushed past Perez to regain control of the third leg of the record 23-race season, and from there the race was his to lose.

"I think Max made a mistake at some point and that was perfect. With Valtteri I had to make the move early on before the tyres were destroyed and I just managed to get him at turn one. Right on my limit. Great race," added Hamilton.

"We were not on top of it here but we'll see what we can do in Barcelona," said Verstappen, referring to next weekend's race in Spain.

Intrigue in the closing stages surrounded the question of who would end up with a potentially crucial point for the fastest lap.

Verstappen thought he'd clinched it only for his effort to be ruled out due to track limits with Bottas eventually taking the honours.

The Red Bulls are emerging as serious challengers to Mercedes' supremacy but the world champions have evidently worked hard to redress any imbalance in performance between the two teams.

And after three legs of the season it is Hamilton in his quest for a record eighth world crown that has won twice, adding this to his opening success in Bahrain, with Verstappen the winner in Imola.

Sitting third in the drivers' standings is Lando Norris for resurgent McLaren after the Briton took fifth on Sunday.

He came in ahead of the Ferrari of Charles Leclerc, with the Alpines of Esteban Ocon and Fernando Alonso, Daniel Ricciardo (McLaren) and the AlphaTauri of Pierre Gasly completing the top 10.

Valtteri Bottas Portuguese Grand Prix Formula 1
Get the latest updates on SA vs IND 2021-22, check out the Schedule and Live Score . Like us on Facebook or follow us on Twitter for more sports updates. You can also download the NDTV Cricket app for Android or iOS.