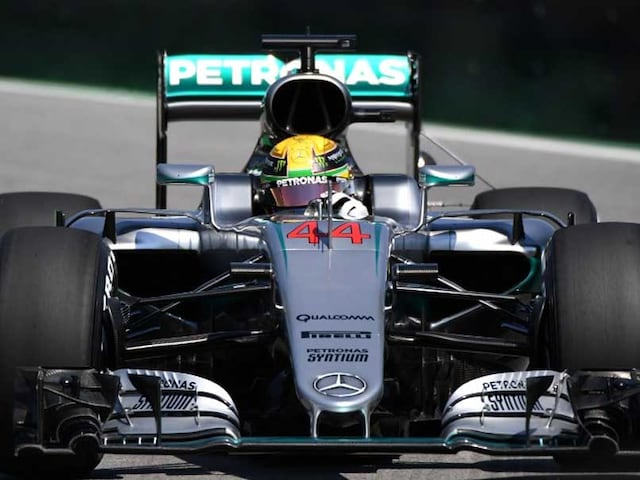 Lewis Hamilton topped the time sheets in both practice sessions on Friday.© AFP

Lewis Hamilton was quickest in both practice sessions Friday at the Brazilian Grand Prix, each time finding just a bit more pace than rival and Mercedes teammate Nico Rosberg.

The Englishman is seeking victory Sunday to definitely push the season-title chase to the last race in two weeks in Abu Dhabi. He's won the last two races in the United States and Mexico, with Rosberg second each time.

Rosberg can claim his first Formula One title if he wins on Sunday, which would deprive Hamilton of a chance for his fourth driver's title.

Rosberg leads Hamilton by 19 points in the season standings through 19 of 21 races.

To be fair, Hamilton might be leading the standings were it not for the Malaysian Grand Prix in October. His engine caught fire near the end of the race, a race he was leading easily. That cost him 25 points, and he's been chasing ever since.

Hamilton was 0.230 seconds faster than Rosberg in the first practice session, and just a tiny sliver faster in the second - 0.030 - on the hilly Interlagos circuit south of Sao Paulo's downtown area.

The track was dry on Friday, and should be in qualifying on Saturday. But rain is in the forecast for Sunday, which could cause havoc and upsets.

Comments
Topics mentioned in this article
Formula 1 Mercedes Lewis Hamilton Nico Rosberg Interlagos Brazilian Grand Prix
Get the latest Cricket news, check out the India cricket schedule, Cricket live score . Like us on Facebook or follow us on Twitter for more sports updates. You can also download the NDTV Cricket app for Android or iOS.