Lewis Hamilton took over as leader of the drivers' world championship for the first time this year on Sunday when he claimed a lights-to-flag victory as Mercedes dominated the Italian Grand Prix. 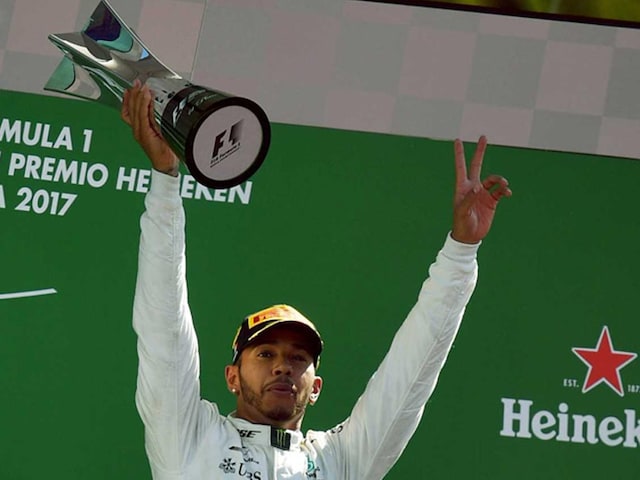 Lewis Hamilton took over as leader of the drivers' world championship for the first time this year on Sunday when he claimed a lights-to-flag victory as Mercedes dominated the Italian Grand Prix. The 32-year-old Briton, seeking his fourth world title, made a perfect start from his record 69th pole position to lead his Mercedes team-mate Finn Valtteri Bottas home for his sixth win this year, his third at Monza and the 59th of his career. Hamilton now leads four-time champion Sebastian Vettel by three points after the German finished third, 36 seconds adrift, in his Ferrari in front of a big home crowd on the weekend of the Italian team's 70th-anniversary celebrations.

Having won in Belgium last Sunday, Hamilton also became the first driver to score back-to-back victories this year. It was Mercedes' third one-two this year and the team's 39th overall.

Hamilton now has 238 points ahead of Vettel on 235 and Bottas on 197 while in the constructors' championship Mercedes lead with 435 to Ferrari on 373.

"I am so happy and the team did a great job - Mercedes power is definitely better than Ferrari power," said Hamilton, who was booed by a large partisan crowd.

Bottas also praised Mercedes' teamwork. "The car was so strong - it was amazing how quick we were and it was a pure joy to drive. A perfect result! No drama," he said.

Vettel added: "It was entertaining, quite good fun. We just didn't have the pace of the leading two drivers, but going around seeing these people gives us a lot of hope. We have a strong car and will have a strong end to the season."

Hamilton made a good start from his record 69th pole position and fended off Canadian teenage rookie Lance Stroll, who started second for Williams after nine drivers were handed grid penalties, to take control on the run to the first chicane.

Behind him, Raikkonen began well and he passed Bottas into the second chicane while Dutchman Max Verstappen, from 13th, was up to eighth on the opening lap.

Bottas bounced back to reclaim fourth from his fellow-Finn on lap two and then passed Stroll and French rookie Estaban Ocon to secure second place behind his Mercedes team-mate.

By lap 14, having run within 10 seconds of the lead as he climbed to third, Vettel was more than 12 seconds behind as Ferrari encouraged their men to find more pace. Raikkonen, in sixth, complained of problems with the rear end of his car.

Hamilton continued to set the pace and had a 'moment' on lap 20 when he skimmed across the edge of a gravel trap at the second chicane. He remained 4.5 seconds ahead of Bottas with Vettel third and Ricciardo, having started 16th closing fast in fourth.

Vettel, who had reported he was "struggling with the rear now", was 22 seconds away from Hamilton by half-distance with little prospect of catching him or Bottas. For the tifosi, it was an unfolding nightmare scenario - a master-class by Mercedes at their own 'Temple of Speed'.

Hamilton finally pitted for softs after 32 laps in 2.5 seconds, passing the lead to Bottas who followed suit immediately in 2.2. It was synchronised perfection from the 'Silver Arrows' with 18 laps remaining.

Hamilton, who had gone five seconds clear, reported he "lost a bit of power" on lap 43. His lead slipped to 3.6 seconds ahead of Bottas, both Mercedes men running with their engines on reduced power as they cruised home.

(This story has not been edited by NDTV staff and is auto-generated from a syndicated feed.)
Comments
Topics mentioned in this article
Mercedes Ferrari Lewis Hamilton Valtteri Bottas Sebastian Vettel Italian Grand Prix
Get the latest Cricket news, check out the India cricket schedule, Cricket live score . Like us on Facebook or follow us on Twitter for more sports updates. You can also download the NDTV Cricket app for Android or iOS.