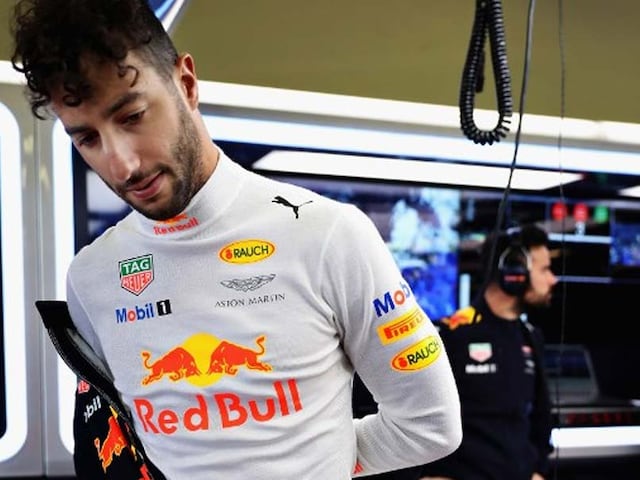 Daniel Ricciardo outpaced championship-chasing Lewis Hamilton to top the times in Friday's second free practice ahead of this weekend's Mexican Grand Prix. The Australian, showing his Red Bull car was competitive in the rarified, thin air conditions, clocked a best lap in one minute and 17.801 seconds to outpace the three-time champion's Mercedes by one-tenth of a second. Hamilton, who needs a top five finish on Sunday to clinch his fourth drivers' world title, was outpaced earlier in the morning's opening free practice session by his Mercedes team-mate Valtteri Bottas.

Hamilton also overcame a spin in the second session.

"It didn't really start out great, particularly in the second session with the big spin on my first lap," said the three-time champion.

"That really threw off the session but we got lots of information, the track was feeling better in the second session once the temperature came up."

Ricciardo admitted that he was expecting the Mercedes team to fight back in qualifying on Saturday.

"It's always nice to top a session," said Ricciardo. "It feels good. We've been chipping away and made some progress and we can find more time on the long runs and low fuel.

"But Mercedes are always strong on Saturdays so we have to see what happens. We can improve a few things. I think it will be very close."

Ricciardo's Red Bull team-mate Max Verstappen was third, before he was halted by an engine failure, ahead of Hamilton's only remaining title rival four-time champion Sebastian Vettel.

The Ferrari driver endured a painful episode during the session when he had to abort a lap and drive back to the pits after feeling a stinging fluid in the seat of his car.

"The car is fine except it was not so good with the extinguisher bursting," said Vettel.

"A screw worked loose and then the pressure forced it all out -- it was not that pleasant for me, but I got a bit of a cool down."

His team-mate Kimi Raikkonen was fifth ahead of Bottas, who was sixth, two-time champion Fernando Alonso of McLaren Honda and local hero Sergio Perez of Force India.

Nico Hulkenberg was ninth for Renault and Esteban Ocon 10th in the second Force India.

On a bright, dry and hot afternoon at the Autodromo Hermando Rodriguez, there were incidents throughout the session.

Frenchman Romain Grosjean spun at the final corner in his Haas after only six minutes and the session was briefly red-flagged to clear the debris from his delaminated tyres.

Once the action resumed, Hamilton spun at the exit of Turn 11 and flat-spotted a set of tyres. He drove gingerly back to the pits.

Verstappen topped the times after 20 minutes ahead of a resurgent Alonso before Vettel reported "something burst" in his cockpit.

The circuit continued to catch many drivers out and Carlos Sainz of Renault, Canadian teenager Lance Stroll of Williams and new boy Brendon Hartley of Toro Rosso all experienced spins and recovered.

Hamilton then roared back into contention, clocking the first lap inside 1:18 to go top in 1:17.932 shortly before Ricciardo trimmed that time by one-tenth to end the opening day on top.

Meanwhile, Alonso and his McLaren Honda team-mate Stoffel Vandoorne will start Sunday's race from the back of the grid after once again being penalised for taking new power units.

The two-time champion Alonso, who was seventh fastest in Friday's second session, was given a penalty of 20 grid positions and the Belgian a 35-place penalty.

Vandoorne, who took a completely new power unit, was 15th in practice.

Frenchman Pierre Gasly was given a five-place grid penalty for a similar infringement in taking a new electronics unit for his Toro Rosso car.

Gasly was brought back into the team as replacement for Russian Daniil Kvyat, who has been released by the Red Bull organisation.

Comments
Topics mentioned in this article
Red Bull Mercedes Daniel Ricciardo Lewis Hamilton Mexican Grand Prix
Get the latest Cricket news, check out the India cricket schedule, Cricket live score . Like us on Facebook or follow us on Twitter for more sports updates. You can also download the NDTV Cricket app for Android or iOS.