Ocon and Perez, who are teammates at Force India, have fought fierce duels this season and have collided at Baku and at the Belgian Grand Prix in Spa. 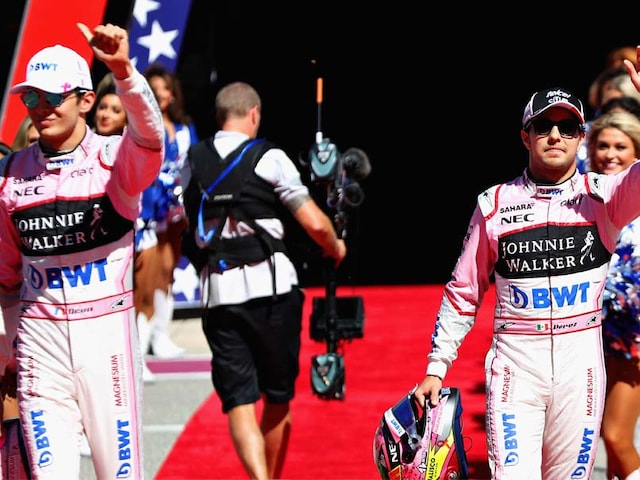 Ocon claimed that he has received death threats from fans for his on-track clashes with Perez.© AFP

French driver Esteban Ocon claimed Thursday that he has received death threats from fans for his on-track clashes with Mexican teammate Sergio Perez and will have to be protected by bodyguards at this weekend's Mexican Grand Prix. "I have been the target of a lot of death threats since the Azerbaijan Grand Prix in June," Ocon said. Ocon and Perez, who are teammates at Force India, have fought fierce duels this season and have collided at Baku and at the Belgian Grand Prix in Spa. Ocon's arrival in Mexico City was put back to Wednesday instead of Tuesday while he will need bodyguards, a police escort and have an armoured car at his disposal during his stay in the teeming Mexican capital.

"We had to take precautions to avoid problems, and today I have all the people I need for my safety," 21-year-old Ocon said Thursday.

"I was expecting a rough reception from fans after all these messages and negative comments which appeared on social networks, but this has not been the case, quite the contrary."

He added: "For the moment everything is fine, and I hope it will continue all weekend."

Ocon said he is not concerned about the welcome he may receive on Sunday where Mexico's passionate sporting fans will be looking for Perez to star.

"As long as they don't throw a stone at my head, it's okay," half-joked the Frenchman.

Perez, meanwhile, tried to defuse the tension by claiming that his relationship with Ocon has warmed since the Italian Grand Prix in early September.

"It's still a sport, I think the fans are going to support him here," said Perez who leads Ocon by 13 points in the world championship and is in seventh place.

Comments
Topics mentioned in this article
Force India Sergio Perez Formula 1
Get the latest Cricket news, check out the India cricket schedule, Cricket live score . Like us on Facebook or follow us on Twitter for more sports updates. You can also download the NDTV Cricket app for Android or iOS.