Six of the 20 drivers remained standing during the protest before the start of the belated season-opening Austrian Grand Prix on Sunday. 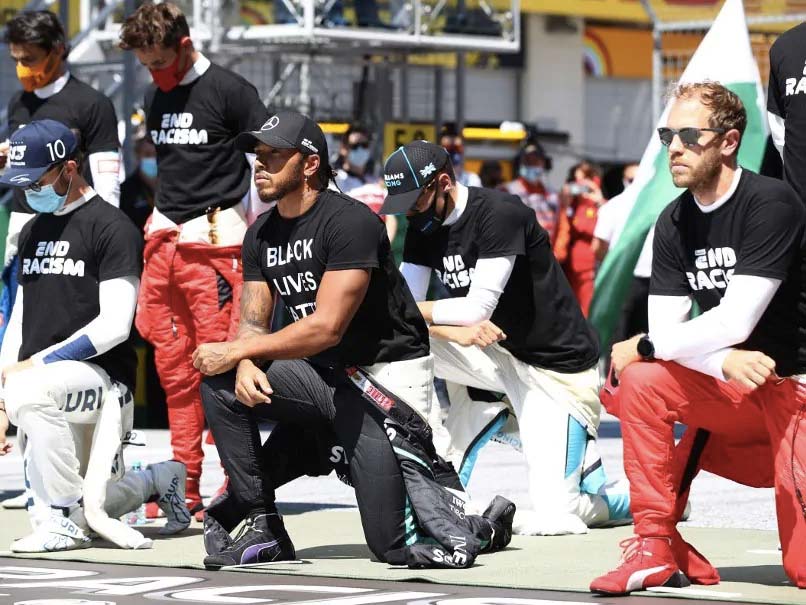 Lewis Hamilton led a majority of the 20 F1 drivers in taking a knee before Austrian GP.© AFP

Lewis Hamiltonexplained he did not push for his fellow drivers to take a knee prior to Sunday's Austrian Grand Prixand said he was "grateful" to the 13 who joined him. The six-time world champion, who finished off the podium in fourth after suffering two penalties on a tumultuous day, said he had avoided requesting the move as he clarified his role in drivers' talks before the race.

"I never requested, or demanded, that anybody take the knee. I never even brought it up," he said.

"Seb (Vettel) and Romain (Grosjean) both raised it and asked the drivers whether or not they would do it and there were several who said they wouldn't.

"I let everyone say what they wanted and then I just opened up to them and I said 'Look, guys, just so you know -- I will be doing it, but you do what you feel is right'."

Hamilton thanked his fellow competitors for their gesture pre-race.

"And I'm really, really grateful to those who did kneel along with me. I think it's still a really powerful message, but ultimately whether or not you kneel, or do not kneel, that's not going to change the world.

"And it's a much, much bigger issue across the world. I think everyone has a right to their own personal choice and, for me, personally, it was what I felt was right to do, but I didn't make the decision until last night (Saturday)."

Hamilton, the sport's only black driver, said the impetus for the group gesture came from the sport's "End Racism" stance.

The message was emblazoned on all the drivers' t-shirts, while Hamilton's Black Lives Matter shirt had it on his back.

Six drivers -- Charles Leclerc, Max Verstappen, Daniil Kvyat, Kimi Raikkonen, Antonio Giovinazzi and Carlos Sainz -- did not kneel, a move that undermined F1's 'We Race As One' stance at the first major international sporting event in Europe since the coronavirus lockdown.

Leclerc, Verstappen and Giovinazzi tweeted their reasons, but their reluctance to kneel was seen by many critics as reducing the group action to an empty gesture.

"I'm aware of some opinions from some of the drivers, but that's more of a private thing and I wouldn't like to share it.

"Ultimately, I think nobody should be forced into a scenario where they have to kneel."

He also revealed he had been forced to remain quiet in the past when he had intended to take a knee to support NFL star Colin Kaepernick's protest made during the American national anthem.

"I had a helmet and everything made in red with his number on the top," said Hamilton.

"But, back then, I was kind of silenced. I was told to kind of back down, don't support it, which actually I will say that I regret."

He added he was unsure of what to expect at future races, but said he would not take a knee during a national anthem.

"I think it's really, really great that F1 and particularly Mercedes have taken note of the issue that we're facing across the world and decided to do something about it.

"Ultimately, everything we do is not going to be enough and we all need to do more. I think that there's been awareness for a few weeks and what we don't need is for it to die a sudden death and just disappear and see no change."

Having decided to join a Black Lives Matter march in London last month and spoken out on the issues and the campaign, there was no doubt Hamilton would be a focal point at F1's comeback event.

"Certain people are making it more political than it is and, then, there is UK Black Lives Matter -- that has spoken out on some more political issues, but the people at rallies and the people out there marching are fighting for one cause and that's for equality.

"It is not a political thing for them. When I wear the shirt, that is what I am supporting. I am not necessarily supporting the political movement. That is something completely different so it is important to try to keep them separate."

Red Bull
Get the latest updates on Fifa Worldcup 2022 and check out  Fifa World Cup Schedule, Stats and Live Cricket Score. Like us on Facebook or follow us on Twitter for more sports updates. You can also download the NDTV Cricket app for Android or iOS.