Ferrari's Charles Leclerc and Red Bull's Max Verstappen had confirmed a split among F1 drivers when they said they would not take a knee on the grid, but that they remained committed to fighting racism. 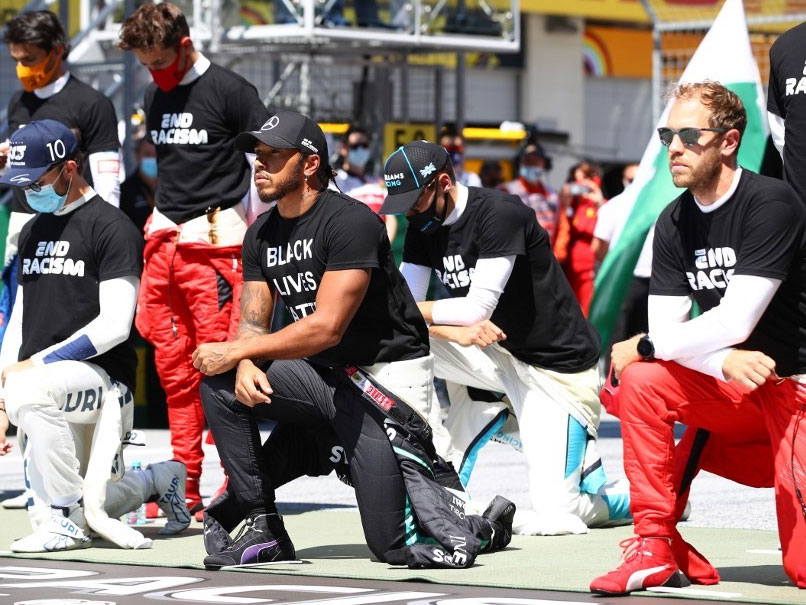 Lewis Hamilton led a majority of the 20 Formula One drivers in taking a knee in a gesture of anti-racism solidarity on the grid before the start of the belated season-opening Austrian Grand Prix on Sunday. Hamilton wore a Black Lives Matter t-shirt, while other drivers, who all lined up with him at the front of the grid, sported black tops saying "End racism". Six of the 20 drivers remained standing during the protest before the Austrian national anthem.

Ferrari's Charles Leclerc and Red Bull's Max Verstappen had confirmed a split among F1 drivers when they said they would not take a knee on the grid, but that they remained committed to fighting racism.

Defending six-time champion Hamilton, who had been relegated to fifth on the grid from second following a Red Bull protest an hour before the start, bowed his head as he took a knee at the front.

Hamilton, the sport's only black race winner and champion, has been outspoken in his support for the anti-racism movement Black Lives Matter (BLM) since the death last month of black American George Floyd under the knee of a police officer.

He called for a change in his sport and launched his own commission.

In addition to Leclerc and Verstappen, drivers Carlos Sainz of McLaren, Danil Kvyat of Alpha Tauri, Antonio Giovinazzi and Alfa Romeo team-mate Kimi Raikkonen chose not to take a knee.

In a statement on Twitter, Leclerc had said: "All 20 drivers stand united with their teams against racism and prejudice, at the same time embracing the principles of diversity, equality and inclusion, supporting F1's and FIA's commitment.

"I believe that what matters are facts and behaviours in our daily life rather than formal gestures that could be seen as controversial in some countries. I will not take the knee but this does not mean at all that I am less committed than others in the fight against racism."

The Grand Prix Drivers Association (GPDA) had issued a statement on Saturday claiming that the drivers' were united in opposing racism, but supporting each individual in being free to choose how to express their positions.

Jean Todt, president of Formula One's ruling body the FIA, told reporters at Spielberg, however, that sport should be wary of allowing itself to be used by political influences.

"Sometimes there is a tendency to use it as a weapon and we have to be very careful of that, but I admire people who have conviction and do as much as they can," he said.

It is believed that some of the drivers have been upset by Hamilton equating "silence" with a supposed level of unconscious racism in the F1 paddock.

The debate over taking a knee comes as FIA pledged to give one million euros ($1.1m) to the sport's new 'We Race As One' diversity foundation.

Todt said it was "a first step - and more will come".

"We should fight any form of discrimination and notably on account of skin colour, religion, ethnic or social origin."

The FIA's cash will go to boost the programme established by Formula One's chief executive Chase Carey who launched the initiative with $1 million of his own money.

The foundation is designed to help finance internships and apprenticeships in F1 for under-represented groups by ensuring there are opportunities for them to fulfil their potential.

"We must promote diversity in motorsport and that is why we decided to give one million euros in contribution to the new dedicated foundation created by F1," said Todt.

Max Verstappen Austrian Grand Prix Red Bull Ring Formula 1
Get the latest updates on Olympics 2020, Olympics 2020 Medal Tally, Live Cricket Score . Like us on Facebook or follow us on Twitter for more sports updates. You can also download the NDTV Cricket app for Android or iOS.