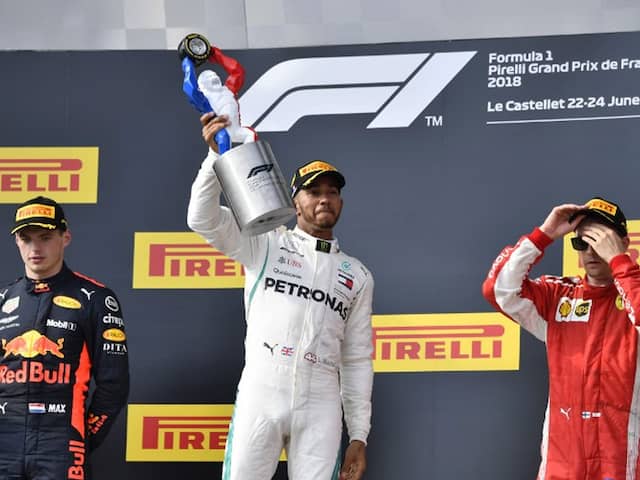 Lewis Hamilton roared to victory with a polished lights-to-flag drive for Mercedes in Sunday's restored French Grand Prix to regain top spot in the world championship. The four-time world champion led from start to finish, bar one lap following his pit stop, as he claimed his first win in France, his third this year and the 65th of his career. Hamilton came home seven seconds clear of Dutchman Max Verstappen with Kimi Raikkonen taking third for Ferrari after passing his Red Bull team-mate Daniel Ricciardo with five laps remaining.

Both suffered damage and, under an early Safety Car, limped to the pits for repairs.

They rejoined from the back of the field to finish fifth and seventh respectively, either side of Kevin Magnussen of Haas, who was sixth.

Vettel had to serve a five seconds penalty, which he took at his second pit stop.Carlos Sainz came home eighth for Renault, to the delight of the crowd, ahead of team-mate Nico Hulkenberg and Charles Leclerc, who secured a point for Sauber with another impressive performance.

"Great work guys, great work everyone," said Hamilton, who had watched England defeat Panama 6-1 in the World Cup before the race.

"It's a good day for England."

The race began in stifling heat with air temperatures soaring over 30 degrees Celsius and the track close to 46 degrees, to which a gusting mistral wind added further challenges.

There was immediate drama on the opening lap when, at Turn One, Vettel rammed into the rear of Bottas's Mercedes in an incident that immediately required the deployment of the Safety Car.

Hamilton, from his record 75th pole position, made a clean departure, but in another incident at Turn Three two of the home French drivers were involved in another crash as Pierre Gasly of Toro Rosso collided with Esteban Ocon of Force India.

Both suffered comprehensive damage to their cars and had to retire, leaving Romain Grosjean to carry the French flag after surviving an incident when Vettel, minus a front wing on his Ferrari, made contact with his Haas car.

Bottas, with a punctured rear left tyre, and Vettel managed to steer their damaged machines back to the pits for repairs and rejoined the fray at the back of the field.

Racing resumed on lap six when Hamilton surged away ahead of Verstappen with Sainz third for Renault.

The Spaniard was under pressure from Ricciardo and he was overtaken by the Australian and then fell to fifth when Raikkonen flew past.

By lap 23, Hamilton was in command ahead of Verstappen by six seconds with Ricciardo, Raikkonen and a charging Vettel, back up to fifth, leading the chase.

Bottas, less effective in his efforts to recover in a car that suffered floor and other damage, was down in 10th.

Rain threatened, but on lap 25, Verstappen pitted for fresh soft tyres, followed a lap later by Sainz. Vettel rose to fourth behind Hamilton and the two Red Bulls.

Ricciardo pitted for second after 28 laps, rejoining fifth behind the German, but it was clear Hamilton was enjoying his Sunday afternoon drive as he led Raikkonen, second, by 20 seconds.

He eventually pitted after 33 laps and came out behind Raikkonen, who led him by three seconds with Verstappen third.

The Finn came in one lap later to rejoin fifth soon after Ricciardo had blasted past an uneven-looking Vettel, who ran wide at Le Beausset.

Bottas finally climbed back to sixth to restore the three big teams' routine occupation of the top positions and, with 12 laps remaining, caused a surprise when he pitted again.

It was a slow stop, at 8.7 seconds, and dropped him to ninth just as Vettel pitted again, taking his penalty before he rejoined fifth for the final charge.

Kimi Raikkonen French Grand Prix
Get the latest Cricket news, check out the India cricket schedule, Cricket live score . Like us on Facebook or follow us on Twitter for more sports updates. You can also download the NDTV Cricket app for Android or iOS.