Sebastian Vettel started from 10th and was ahead on the opening lap when Charles Leclerc launched his attack, an ill-judged move that ruined the race for both men. 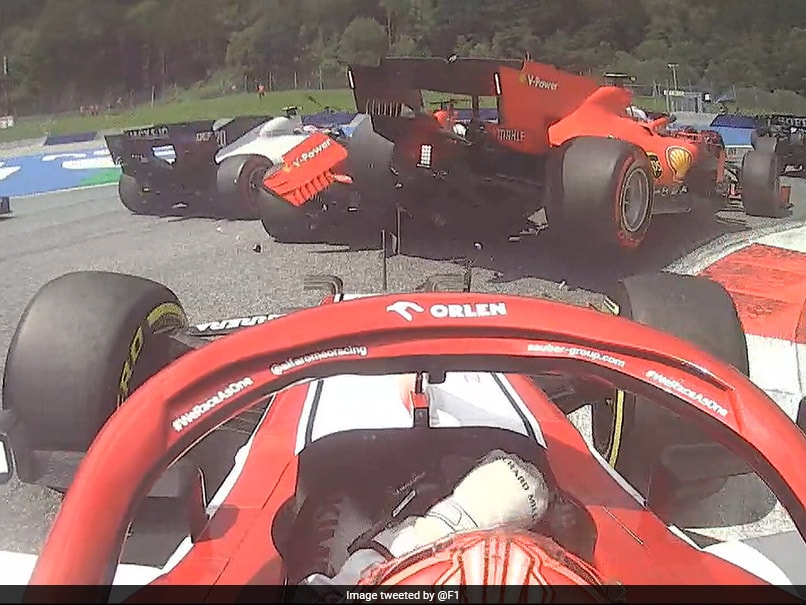 Charles Leclerc started from 14th on the grid following a three-place penalty.© Twitter@F1

Ferrari's nightmare start to the 2020 Formula One season continued on Sunday when Charles Leclerc collided with Sebastian Vettel on the opening lap of the Styrian Grand Prix. The Monegasque attempted to push past his team-mate on the inside of Turn Three, but rode the kerbs and instead launched his vehicle into the rear of Vettel's machine. The impact severely damaged the rear of the four-time champion's car, tearing off the rear wing and forcing him to pit and retire after a Safety Car had been deployed.

Leclerc pitted for repairs and continued, but he also pulled out once the action resumed - resulting in both men being out of the race before the start of the sixth lap.

"I am sorry and I apologise to Seb and I know it is not enough at times like this," he told broadcaster Sky Sports.

"I hope I learn and come back stronger next race - it is a tough time for the team and they don't need that - I put all thoughts of the team in a bin and I am sorry.

"I was too optimistic this move," he added.

Leclerc had started from 14th on the grid following a three-place penalty for an incident involving Daniil Kvyat's Alpha Tauri in Saturday's rain-swept qualifying.

Vettel started from 10th and was ahead on the opening lap when Leclerc launched his attack, an ill-judged move that ruined the race for both men.

Four-time champion Vettel is in his final season with Ferrari after being told he is surplus to requirements next season and has made clear he was surprised and upset by the decision.

Both drivers have complained their SF1000 car this year is difficult to drive and lacks competitive pace.

The team brought a package of upgrades to the second race of the season, following last week's disappointing showing, but team boss Mattia Binotto admitted on Saturday they had not been effective.

Leclerc finished a fortunate second at the season-opening Austrian contest when many of his rivals were penalised or retired, only 11 of the 20 starters finishing the race.

"There was nothing I could do," said Vettel.

"There was not enough space on the track and that is why we collided.

"The car had felt a lot better, but we don't know do we? We don't have the answers"

Sebastian Vettel Charles Leclerc Red Bull Ring Formula 1
Get the latest updates on ICC Women's Cricket World Cup 2022 and IPL 2022, check out the Schedule , Live Score and IPL Points Table. Like us on Facebook or follow us on Twitter for more sports updates. You can also download the NDTV Cricket app for Android or iOS.