Lewis Hamilton clocked a track record best lap in one minute and 7.281 seconds on his second run in the final session. 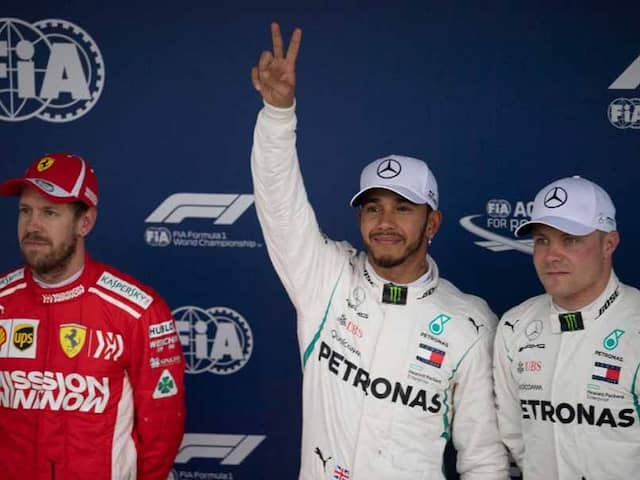 It was a record-increasing 82nd pole for Lewis Hamilton, who has won only once in Brazil.© AFP

Record-breaking Lewis Hamilton claimed his 10th pole of the season and Mercedes' 100th in Formula One on Saturday when he dominated a rain-threatened qualifying session for Sunday's Brazilian Grand Prix. The new five-time world champion clocked a track record best lap in one minute and 7.281 seconds on his second run in the final session to boost his hopes of a rare Interlagos victory and Mercedes bid for a fifth straight teams' title. That lifted him clear of Sebastian Vettel of Ferrari by almost one-tenth of a second with his Mercedes team-mate Valtteri Bottas, who took pole last year, third ahead of Kimi Raikkonen in the second Ferrari.

Hamilton was delighted with pole.

"That was a tough session," he said. "The weather was going up and down.Ferrari are very quick this weekend, but we did a lot of work to make sure we are ready.

"It's great to be here in Brazil -- I have Ayrton Senna's design on my helmet."

The leading four drivers were scrapping for any advantage for their teams as Ferrari bid to out-score Mercedes by 13 points to keep alive their bid to stop them retaining the constructors' championship.

It was a record-increasing 82nd pole for Hamilton, who has won only once in Brazil, in 2016, and the first time he has taken a pole position in any races after he has won the championship.

Max Verstappen was fifth ahead of his Red Bull team-mate Daniel Ricciardo, Marcus Ericsson and his Sauber team-mate Charles Lerclerc, Romain Grosjean of Haas and Pierre Gasly of Toro Rosso.

Vettel was called to the stewards after the session following an incident when he was summoned to the weighbridge, refused to turn off his engine and destroyed the scales when he drove off them.

"I think it's better if I don't say anything," said Vettel afterwards. "They shouldn't call us like that. When the conditions are like that, it's not fair. I wanted them to hurry up."

Vettel still retained second place on the grid after a stewards' inquiry only reprimanded and fined him for destroying the weighbridge.

The four-time champion was instead fined 25,000 euros.

"The stewards found that the driver failed to follow the instructions of the relevant officials for the safe and orderly conduct of the event and order a reprimand (non-driving) and a fine of 25,000 euros," said a statement.

Kimi Raikkonen Brazilian Grand Prix
Get the latest Cricket news, check out the India cricket schedule, Cricket live score . Like us on Facebook or follow us on Twitter for more sports updates. You can also download the NDTV Cricket app for Android or iOS.