Vettel secured his 51st career pole with a supreme lap in the closing stages of a tense qualifying session under floodlights. 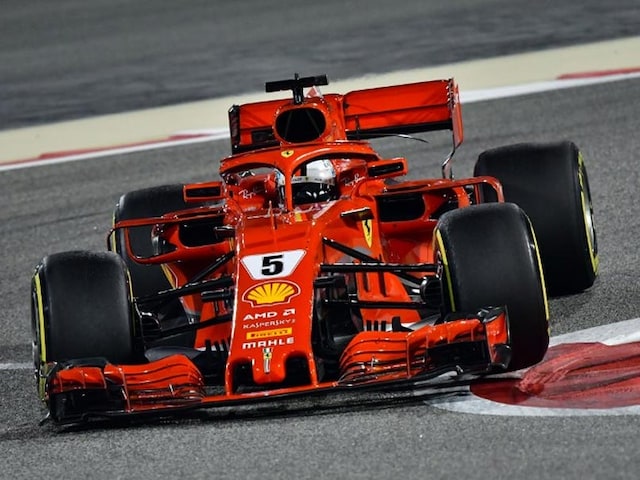 Championship leader Sebastian Vettel will start his 200th Formula One race from pole position after he and Ferrari team-mate. Kimi Raikkonen locked out the front row for Sunday's Bahrain Grand Prix. The German secured his 51st career pole with a supreme lap in the closing stages of a tense qualifying session under floodlights in which Ferrari were dominant on Saturday. "Yes, P1! Pole position," said Vettel. "That was a lion lap." Valtteri Bottas was third fastest for Mercedes behind the two Ferraris, but ahead of his team-mate, defending champion Lewis Hamilton, who has a five-place grid penalty after an overnight gearbox change.

That will promote Australian Daniel Ricciardo from fifth to fourth for Red Bull ahead of Frenchman Pierre Gasly of Toro Rosso and Dane Kevin Magnussen of Haas.

German Nico Hulkenberg was eighth for Renault ahead of Frenchman Sebastian Ocon in the second Toro Rosso and Spaniard Carlos Sainz in the second Renault.

The German, the winner of the season-opener in Melbourne, will be joined on the front row by his Ferrari teammate Kimi Raikkonen.

Lewis Hamilton produced the fourth fastest time at the floodlit circuit in Sakhir but the Mercedes world champion will start from ninth on the grid after picking up a five-place penalty for gearbox change.

Hamilton's Mercedes teammate Valtteri Bottas came in third with Red Bull's Daniel Ricciardo moving up to join the Finn on the second row in place of him.

Comments
Topics mentioned in this article
Ferrari Red Bull Mercedes Sebastian Vettel Kimi Raikkonen Lewis Hamilton Bahrain Bahrain Grand Prix Formula 1
Get the latest updates on IPL 2020, check out the IPL Schedule for 2020 and Indian Premier League (IPL) Cricket live score . Like us on Facebook or follow us on Twitter for more sports updates. You can also download the NDTV Cricket app for Android or iOS.