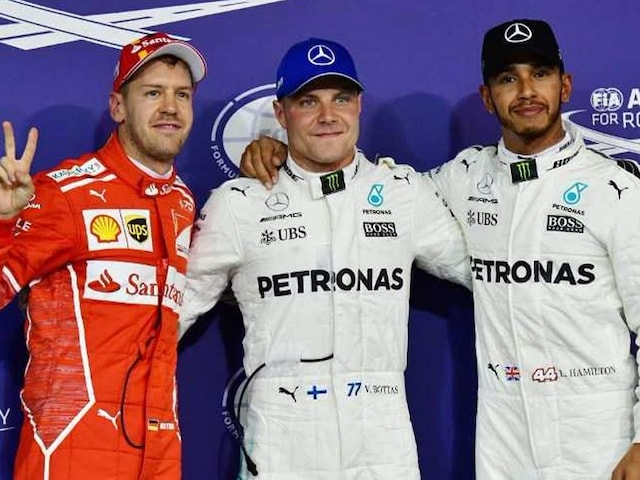 German Nico Hulkenberg took seventh for Renault ahead of Mexican Sergio Perez and his Force India team-mate Esteban Ocon, with retirement-bound Brazilian Felipe Massa 10th in his final outing for the Williams team.

"Thanks guys," said Bottas, whose wife is at the circuit, at the end. "You know, family support is always nice!"

"Things were getting better and better in practice and it was all under control. I felt good in the car. I'm really happy. I was so gutted in Brazil to be on pole and to miss out on the win so I have a clear target for tomorrow."

Hamilton did his utmost to grab pole, but said: "I am delighted for Valtteri. He did a great job and deserved it. What a lap. He had an incredible session and congratulations to him.

"I think I was up a bit on Turn One, but then I lost it on turns five and six, but otherwise it's been an incredible year of qualifying and one I've enjoyed."

On another hot day at the Yas Marina Circuit, Bottas and Hamilton dominated in Q1 which concluded with Frenchman Romain Grosjean eliminated.

Rookie New Zealander Brendon Hartley came in down in 20th place in his Toro Rosso.

Hamilton then scorched to another track lap record lap in 1:36.742, two-tenths faster than team-mate Bottas. Apparently satisfied, Mercedes retired to their garage.

Vettel and Raikkonen did the same for Ferrari after securing third and fourth spots to secure passage to the top-ten shootout.

All bar Ferrari made second runs in the final seconds during which Massa gate-crashed Q3 with a flying final lap that pushed his one-time Ferrari team-mate Fernando Alonso down to 11th.

Out with the McLaren Honda man went his fellow Spaniard Carlos Sainz in his Renault, Belgian Stoffel Vandoorne in the second McLaren, Dane Kevin Magnussen of Haas and Canadian rookie Lance Stroll in the second Williams.

The final seconds of the session saw a near-accident when Perez slowed on the racing line at the final corner, forcing Hulkenberg to move inside to avoid hitting his car at high speed.

Both men slid and scurried on their final laps, but were unable to improve their times as the track temperature fell to 29 degrees.

Their earlier laps were enough as Bottas took pole in spite of a slower lap which persuaded him to pit early at the end of the session.

It was the Mercedes team's fourth consecutive front row lockout at the Abu Dhabi Grand Prix and the team's 50th in Formula One.

Comments
Topics mentioned in this article
Ferrari Mercedes Lewis Hamilton Valtteri Bottas Sebastian Vettel Abu Dhabi Grand Prix
Get the latest Cricket news, check out the India cricket schedule, Cricket live score . Like us on Facebook or follow us on Twitter for more sports updates. You can also download the NDTV Cricket app for Android or iOS.