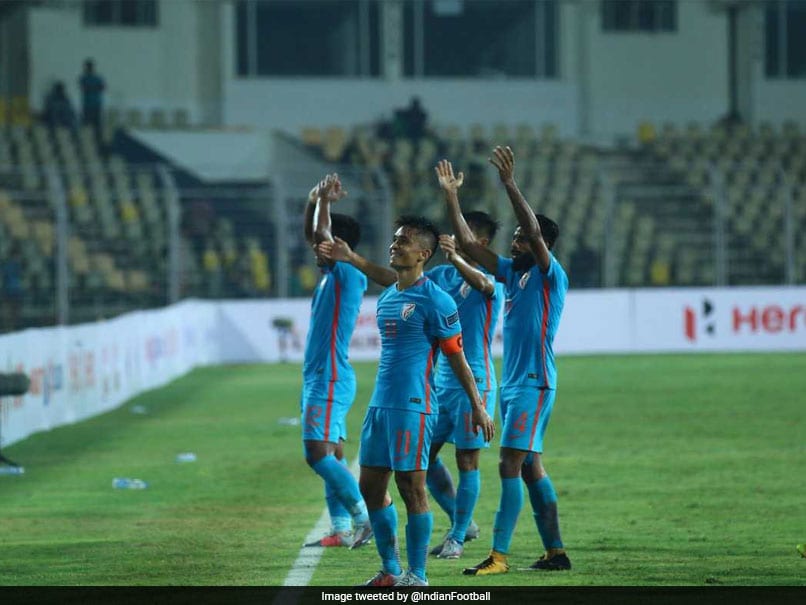 India face Kenya in their second match of the Intercontinental Cup in Mumbai on Monday.© Twitter

Sunil Chhetri had made a heartfelt plea to fans on Saturday to go watch India football matches in the stadiums. The India football team captain's appeal seems to have done the trick with NDTV sources saying that the Intercontinental Cup match between India and Kenya at the Mumbai Football Arena on Monday has been sold out. Chhetri, who will be making his 100th international appearance for India, had posted an emotional video on Twitter, pleading with fans to "abuse us, criticise us but please come to watch the Indian national team play."

According to NDTV sources, the 10-15,000 capacity stadium in Mumbai for India's second match of the tournament has been sold out.

C'mon India... Let's fill in the stadiums and support our teams wherever and whenever they are playing. @chetrisunil11 @IndianFootball pic.twitter.com/xoHsTXEkYp

Chhetri's comments came a day after he scored a hat-trick that helped India outclass Chinese Taipei 5-0 the their opening match of Intercontinental Cup. However, reports in the India media suggested a disastrous turnout for the match with the official figures saying that 2,569 fans were present at the stadium to watch India's win.

The Indian football captain's hat-trick helped him achieve a remarkable feat. Chhetri is third on the list of the highest active goal-scorers in international football with 59 goals to his name.

He overtook American Clint Dempsey and drew level with Spanish star David Villa on the list. Only Portugal's Cristiano Ronaldo and Argentine genius Lionel Messi are head of the Indian striker.

The Indian football team has seen an upturn in their fortunes off late that has seen the men's team improve their ranking to 97.

After the match against Kenya on Monday, India face New Zealand on June 7, also in Mumbai. The Intercontinental Cup is a preparation tournament for the 2019 Asia Cup in the United Arab Emirates (UAE).

India have been drawn in Group A alongside hosts UAE, Thailand and Bahrain.

(With inputs from Akaash Dasgupta)

India Football Team Sunil Chhetri Football
Get the latest updates on ICC Women's Cricket World Cup 2022 and IPL 2022, check out the Schedule , Live Score and IPL Points Table. Like us on Facebook or follow us on Twitter for more sports updates. You can also download the NDTV Cricket app for Android or iOS.