Pierre-Emerick Aubameyang is here to entertain 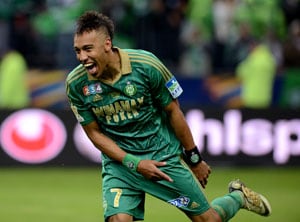 There was a lovely moment at the end of Borussia Dortmund 4-2 victory over Bayern Munich in the German Super Cup. As the Dortmund players sat, celebrated and danced in front of their adoring fans at the Signal Iduna Park, new recruit Pierre-Emerick Aubameyang walked up to the netting that separate the fans from the pitch. Over a dozen supporters were perched on the fencing with Aubameyang gesturing to one in particular. The fan in question threw down a Spiderman mask which the striker picked up, put on and posed for 80,000 cheering fans.

Aubameyang returned the mask to its owner as Dortmund welcomed their new fan favourite.

Pierre-Emerick Aubameyang is known for his quirky celebrations with the mask, from his days at Saint-Etienne in France and Germany looks set to follow suit. He is not the first though to pull off the web-weaving trick with Newcastle United's winger Jonas Gutierrez possessing an endless stock of Spiderman masks underneath his shorts. Prior to these two, Fulham's former striker Facundo Sava built a reputation for his extravagant goal celebrations. Every time the Argentine scored, a disguise straight out of the Mask of Zorro series would be pulled from his sock and placed over his eyes.

Aubameyang was introduced against the Bundesliga champions with Dortmund leading 3-2 and the players having taken their second 'water break' of the match. The game was played in searing conditions in Germany with each half divided into two parts as both sides were allowed to replenish their fluids.

Aubameyang, on his part, has blistering pace to his credit and is faster than Usain Bolt over 30 meters! The 24-year-old had a chance to showcase his speed as he was put through on goal against the on-rushing Bayern keeper Tom Starke. Aubameyang however fluffed his chance and hit it straight at the legs of Starke. The pace, however, was there for all to see.

The French-born Gabon international would not be kept quiet for long. Put through by Robert Lewandowski on the right flank, Aubameyang was up against a similar foe in Starke. This time however, he squared the ball to Marco Reus and Dortmund scored the final goal of the game to claim a 4-2 victory. The players ran to their latest teammate and ruffled his perfect rust-stained Mohawk but nothing could wipe the smile off Aubameyang's face.

He further endeared himself to the yellow-and-black army in the final stages of the match when the ball was with Starke. Again from the right wing, Aubameyang saw the keeper dawdling and ran towards him. With Cheetah-like pace and urgency, Aubameyang was inches away from the ball before Starke cleared, as the cauldron of the Westfalenstadion were on their feet to salute their new hero.

This was followed by the Spiderman celebrations as Sebastian Kehl lifted the cup. Also, it was nice to see 23 million Pound signing Henrikh Mkhitaryan and the stricken Lukasz Piszczek as part of the celebrations as well.

Aubameyang may have been on the field for barely 20 minutes but he seems a perfect foil to the poacher-like Lewandowski as opposed to a direct replacement for the Pole. Effective from the wing, Aubameyang, in a brief cameo, left teammates and fans begging for and anticipating more.

PS: Has there ever been a dull match between Dortmund and Munich in the recent past?