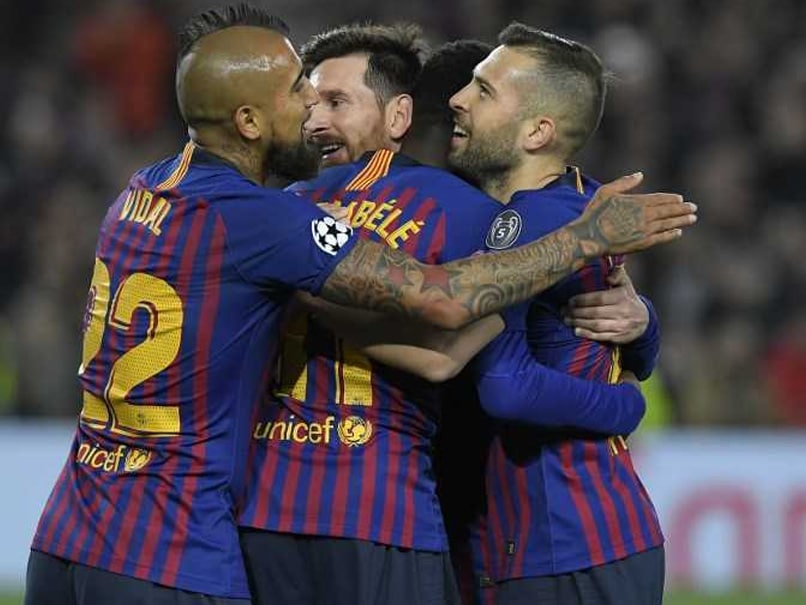 Lionel Messi now has 108 goals in the Champions League.© AFP

Lionel Messi came up just short of matching Cristiano Ronaldo's hat-trick a day earlier but still scored twice and set up two more as Barcelona beat Lyon 5-1 on Wednesday to reach the Champions League quarter-finals. After Ronaldo's treble on Tuesday for Juventus sent Atletico Madrid packing in Turin, Messi delivered his own symphony at the Camp Nou, where Lyon were outplayed save for a very brief period in the second half when they threatened a comeback in this last-16 tie.

"Cristiano yesterday was impressive," Messi said afterwards. "It was a big surprise because I thought Atletico would be stronger but Cristiano had a magical night."

A 0-0 draw in France in the first leg last month meant Lyon always had a chance to make Barca nervous, but Messi's sumptuously chipped penalty and a simple finish from Philippe Coutinho looked to have finished them off before half-time.

Yet Lucas Tousart's volley left Lyon one goal away from putting Barcelona out, only for Messi to take charge again. He scored once more, before teeing up Gerard Pique and Ousmane Dembele to complete the victory.

Messi now has 108 goals in the Champions League, behind Ronaldo's imperious 124, but his latest double takes his team one step closer to the trophy they crave the most.

"When he is at that kind of level, he is almost unstoppable," Lyon coach Bruno Genesio said. "We did what we could."

The last time Spain only had one team left at this stage was 2010 and after defeats for Atletico and Real Madrid, it was up to Barca to avert a first Spanish blackout since 2005.

Coutinho had been whistled off by his own fans last weekend but was picked to start, preferred to Dembele who had just recovered from a hamstring strain. The Brazilian was bright, enjoying one of his best performances in weeks.

"In the last few weeks, months even, I've not been playing well," Coutinho said. "You never know what the future holds but I am happy with my performance today."

"He has come in after not such a good run," said coach Ernesto Valverde. "It was an important match for him and he played very well."

Lyon could barely escape their own penalty area in early exchanges as Messi got to work. He fired one shot towards the top corner and then latched onto a Sergio Busquets pass but Anthony Lopes sprung out to intercept.

Jason Denayer was not as quick in the 16th minute. By the time he had twisted to follow Messi's pass, the excellent Luis Suarez was a step ahead. Denayer slid but was nowhere near the ball and Suarez dragged his foot to make the contact clear.

A penalty was given, although Messi was made to wait while VAR checked, but there was no sign of tension. His chip down the middle was exquisite.

Lyon improved and Moussa Dembele's shot needed a strong block from Clement Lenglet before Lopes collided with Coutinho and had to be replaced, in tears, in the 34th minute by Mathieu Gorgelin.

That was not before Barca had scored a second as the faultless Arthur Melo played an angled pass into Suarez, who wriggled clear. With only Lopes to beat, he tapped across for Coutinho, who had an open net.

Lyon looked dead and buried but found a way back in. It came from a corner, which Barca three times failed to clear. Amid the scramble, Tousart had time to chest and volley into the corner.

For 10 minutes, Barcelona were edgy but while Nabil Fekir lashed over, Lyon failed to step forward. Their momentum subsided and Messi finished them off in a late flurry.

First, his dummy sent Denayer and Marcelo flying and his shot was too strong for the weak hand of Gorgelin. Then, he twice tore away on the counter-attack, picking out Pique at the back post and finally Dembele, who made it five.