Eden Hazard was looking beyond Real Madrid to the Euros after undergoing surgery on his right foot in March while some felt Luis Suarez had played his last game for Barcelona after having a knee operation in January. 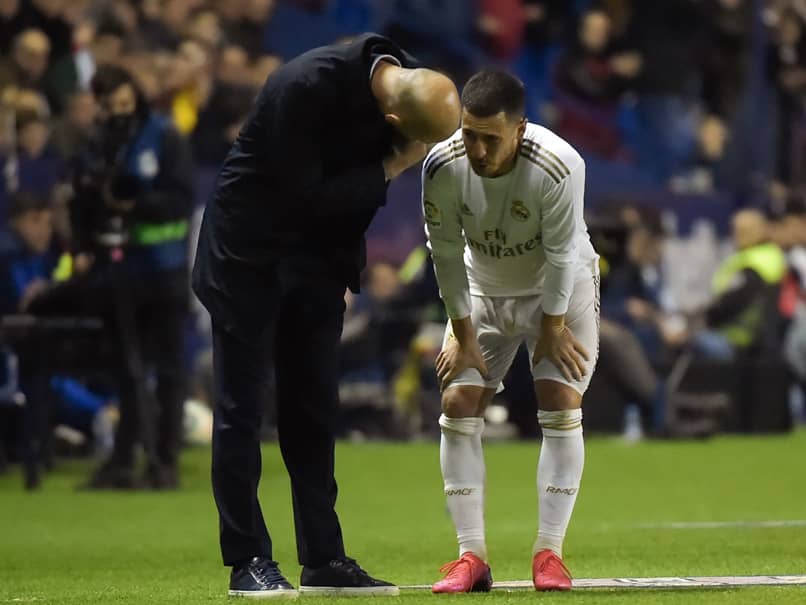 Every time he has come back, Eden Hazard has needed time to find form.© AFP

When La Liga stopped they were not expected to play any part in the rest of the title race but when the season resumes on Thursday, Eden Hazard and Luis Suarez could be set to decide it. Hazard was looking beyond Real Madrid to the Euros after undergoing surgery on his right foot in March while some felt Suarez had played his last game for Barcelona after having a knee operation in January. Instead, both have been thrown a lifeline, Suarez to preserve his career at Barca and Hazard to kickstart his with Madrid.

After Real Madrid paid 100 million euros ($108.4 million) to sign him from Chelsea last year, fans sprinted outside the Santiago Bernabeu to beat the queues for Hazard's unveiling, and around 50,000 made it inside.

However questions were soon being asked about his weight in pre-season, and he has struggled with injury all season.

Every time he has come back, Hazard has needed time to find form, initially lacking that burst of speed and change of direction that at his best, can leave a defender for dead.

But reports from Valdebebas have been positive, with Thibaut Courtois saying on Sunday he had been surprised by the Belgian's "rhythm" before adding a note of caution. "We can't expect him to be on top form without playing," he said.

Barca coach Quique Setien has been similarly circumspect over Suarez, who is also not renowned for quick returns to sharpness after time away.

"He is better than we expected," Setien said on Sunday. "But the question is how ready he is after so long out and whether he is ready to start."

Despite winning the Clasico on March 1, Madrid were in a slump before the hiatus, that 2-0 victory over Barcelona their only win in five games.

They lost the defensive steel that saw them go 21 matches unbeaten either side of Christmas and a familiar bluntless, still lingering from Cristiano Ronaldo's departure, remains.

Hazard was supposed to help fill the creative void but 11 games over five and a half weeks offers no room for rustiness and, unlike Suarez, this is still a new team to him. Fifteen appearances in 10 months hardly breeds familiarity.

Barca meanwhile need bodies as they have only 19 fit senior players, which leaves them surprisingly ill-equipped to capitalise on two extra substitutes.

The club sold back-ups in January to raise funds for a striker that never arrived and instead they were left to exploit La Liga's emergency signing rule in February to poach Martin Braithwaite from Leganes.

But Suarez brings experience and quality, not to mention the best out of Lionel Messi.

In full flow, Messi could see off Real Madrid but the Argentinian has had his own injury problems this season, the latest a minor thigh complaint that led to him missing three training sessions last week.

Barcelona have a two-point advantage and the marginally more favourable fixtures, particularly as the usually heated atmospheres at Sevilla and Alaves will be negated by empty stands.

They play Atletico Madrid at home too but have not lost to them at Camp Nou in 14 years.

Yet bubbling distrust of the Barca board could resurface at any moment and Madrid have the better head-to-head record, meaning they only need to be level on points to be crowned champions.

They play away at high-flying Real Sociedad and Athletic Bilbao but more important could be how they take to their new training ground home, the Alfredo di Stefano Stadium, while renovation work continues at the Bernabeu.

Madrid have Marco Asensio fit again while Gareth Bale has been the fittest of anyone in training. Zinedine Zidane's knack for winning knock-out tournaments might even be well-suited to a 39-day sprint finish.

Zidane was close to the sack in September but almost a year later, only one thing is certain. Nothing is the same.