Luis Suarez shows no sign of letting up, the Uruguayan now with 11 goals in his last nine games and 16 for the season. 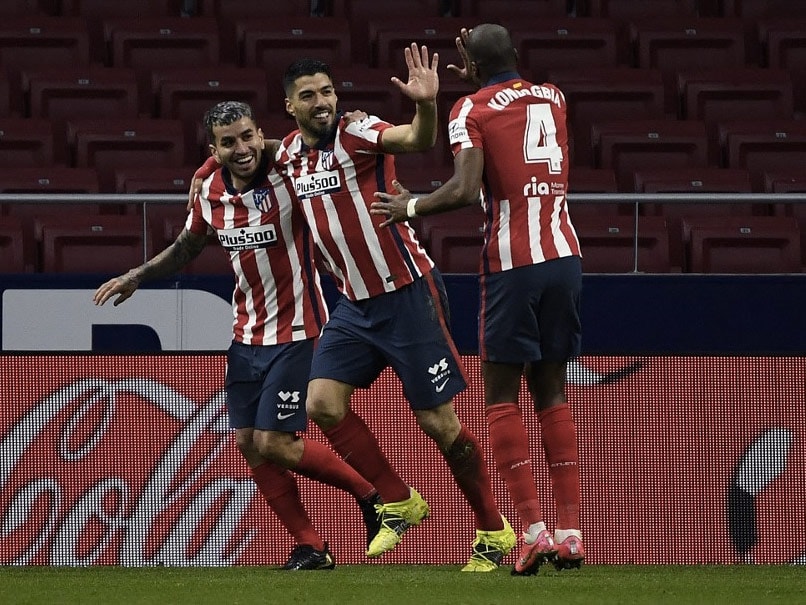 Luis Suarez scored twice at the Wanda Metropolitano but Atletico Madrid had to settle for a draw.© AFP

Atletico Madrid slipped up in La Liga for the first time in nine games on Monday as Celta Vigo snatched a late equaliser to deliver a ray of hope to Barcelona and Real Madrid. Luis Suarez scored twice at the Wanda Metropolitano to overturn Santi Mina's opener for Celta, with Atletico on course to restore their 10-point lead at the top of the table. But Facundo Ferreyra slid in to score in the 89th minute to earn a deserved 2-2 draw for the visitors, meaning Atletico's advantage at the end of the weekend is reduced to eight, still with a game in hand.

"We played quite well but they had a strong finish and a draw was probably fair," said Diego Simeone.

Atletico still have a considerable cushion but after Real Madrid and Barca beat Huesca and Real Betis respectively, there is at least room for encouragement for the chasing pack. Real Madrid can cut the gap to five points if they win at home to Getafe on Tuesday.

Suarez shows no sign of letting up, the Uruguayan now with 11 goals in his last nine games and 16 for the season.

Those 16 goals in 17 games played for Atletico make him the fastest player to score that many for a La Liga club in the 21st century, one game faster than Cristiano Ronaldo after he joined Real Madrid.

Atletico have been hit hard by coronavirus in recent months, the club confirming another two positive cases on Monday afternoon.

Thomas Lemar and Hector Herrera join Mario Hermoso, Joao Felix and Moussa Dembele on the list of those currently out after contracting the illness.

"We have to make the best of it," said Simeone. "We have footballers who can take advantage of the opportunities and we hope that the boys recover."

Celta, who stay 10th, were the better side in the first half, dominating possession and taking a deserved lead after 13 minutes when Hugo Mallo curled in a cross from the right for Mina to head in.

Atletico rarely troubled Celta but managed to go in level, Suarez scoring with their first shot on target. Marcos Llorente's driven cross evaded four sets of Celta toes and found him at the back post.

Lucas Torreira came on at half-time for Felipe -- Atletico reverting to a back four -- and within five minutes they were ahead.

Geoffrey Kondogbia floated a ball out to the left and Renan Lodi volleyed it across goal, where the sliding Suarez arrived on his knees to finish.

Celta almost had a second when Iago Aspas bundled through but Kondogbia darted back to make a superb tackle, just as the striker was about to shoot.

Atletico were moments away but caved with one minute left, a brilliant through ball by Aspas freeing Augusto Solari, whose cross found Ferreyra two metres out.

Luis Suarez Football
Get the latest updates on SA vs IND 2021-22, check out the Schedule and Live Score . Like us on Facebook or follow us on Twitter for more sports updates. You can also download the NDTV Cricket app for Android or iOS.