Zinedine Zidane said in July it would be "best for everyone" if Gareth Bale left this summer but it was the Welshman's double that earned Real Madrid a point. 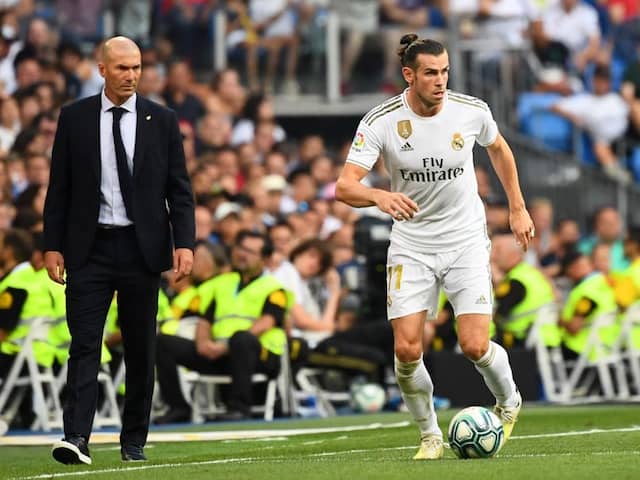 Gareth Bale scored twice to save Real Madrid from a defeat before being sent off in injury-time.© AFP

Gareth Bale scored twice to save Real Madrid from a damaging defeat away at Villarreal on Sunday before capping a dramatic 2-2 draw by being sent off in injury-time. Zinedine Zidane said in July it would be "best for everyone" if Gareth Bale left this summer but it was the Welshman's double that earned Madrid a point from a thrilling contest at la Ceramica. Villarreal took the lead through Gerard Moreno in the 12th minute and then Moi Gomez 16 minutes from the end but each time Bale pegged them back, first on the stroke of half-time and then four minutes from the end.

Two yellow cards in as many minutes then saw Bale dramatically sent off in the 94th minute but by then his match-saving contribution was complete.

"I am pleased with his goals, of course, and now we have to think about a rest," Zinedine Zidane said. "Although he won't rest as he's going away with his national team."

It was six years to the day that Real Madrid paid 100 million euros (now USD 110m) to sign Bale, who now has 104 goals for the club, as many as the Brazilian Ronaldo.

But his heroics could not save Real Madrid from another slip, which means they head into the international break five points behind early front-runners Atletico Madrid, who had earlier beaten Eibar 3-2.

"We have to improve defensively," Zidane said. "We know we can create chances. The positive is the reaction we showed because it is important not to lose."

Asked what was lacking, Casemiro said: "We lacked everything."

After drawing at home to Real Valladolid though, this was not the result Zidane would have wanted, particularly given he threw two new signings into his starting line-up.

Luka Jovic and Ferland Mendy both started, with Bale on the left of midfield in a 4-4-2, a sign of Zidane's renewed faith in the 30-year-old's defensive capabilities.

Zidane has now won only six of the 14 matches since he returned as coach in March and it remains to be seen if the club make any late additions on the final day of the transfer window on Monday.

Sergio Ramos was at fault for the first goal, robbed on the halfway line by Moreno, who drove forward and slipped in Karl Toko Ekambi. Ekambi's shot was parried by Thibaut Courtois but only back into the path of Moreno, who picked his spot.

Madrid dominated the rest of the half as Casemiro headed wide, Lucas Vazquez lashed into the side-netting and Karim Benzema's long-range effort hit the post.

They did score in the 46th minute with a brilliant goal, Jovic flicking Casemiro's pass into Dani Carvajal, who crossed first time for Bale to tap in.

Madrid pushed for a second after the restart as Bale and Toni Kroos went close and Benzema had the ball in the net but was correctly called offside.

Instead, Villarreal landed a sucker-punch on the break as Mario Gaspar's cross was cleared only to Santi Cazorla. His shot was saved by Courtois but Javi Ontiveros fired in again and Moi Gomez was perfectly placed.

Villarreal tried to hang on but tension set in and Bale equalised with four minutes left, cutting inside from the right and dragging a shot back inside the near post.

He might have fancied a hat-trick in injury time but instead picked up two yellow cards, the second for a late challenge on Ontiveros.

Villarreal Gareth Bale Zinedine Zidane Football
Get the latest updates on IPL 2020, check out the IPL Schedule for 2020 and Indian Premier League (IPL) Cricket live score . Like us on Facebook or follow us on Twitter for more sports updates. You can also download the NDTV Cricket app for Android or iOS.